A Limo Heading To Prom Catches On Fire — Twice 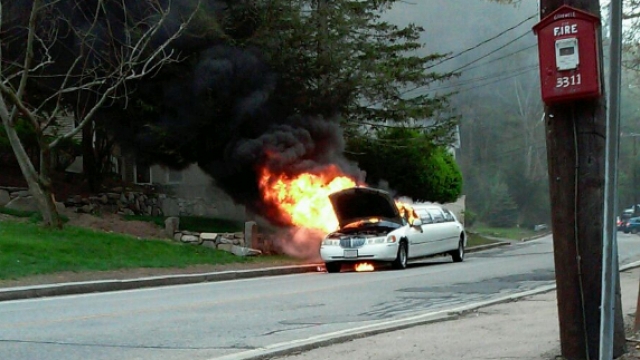 SMS
A Limo Heading To Prom Catches On Fire — Twice
By Melissa Prax
By Melissa Prax
May 14, 2016
A limo outside of Boston burst into flames, and the driver and students inside escaped without injury.
SHOW TRANSCRIPT

High school promgoers in Massachusetts had to act fast when the limo they were riding in caught fire.

The group of 10 was heading to the school dance Friday night in a town just outside of Boston when smoke poured out of the engine. The students got out of the limo just before it burst into flames.

"Well it was Friday the 13th, so that was a big thing, but it was just crazy," one of the limo passengers said.

Thankfully there were no injuries. Firefighters were able to put out the fire, but it did relight a second time.

"It was spreading. It was heading towards the gas tank, and I knew there might be an explosion," said the driver who picked up the students.

The kids still made it to prom thanks to another driver who picked them up. The cause of the fire is still under investigation.

This video includes clips from NECN and WHDH and images from Natick Police and Kiat Cormier.