A Le Pen Win In French Election Could Be Major Blow For Pres. Biden 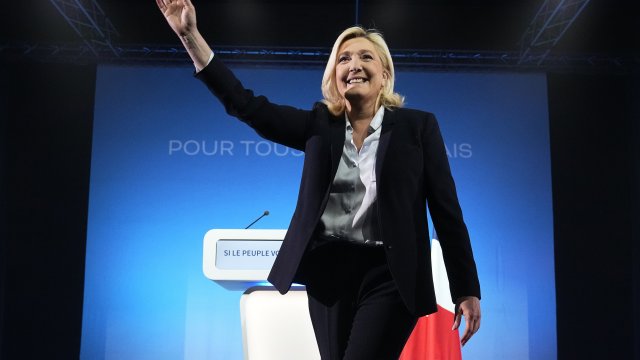 SMS
A Le Pen Win In French Election Could Be Major Blow For Pres. Biden
By Ben Schamisso
By Ben Schamisso
April 21, 2022
Marine Le Pen has long admired Russia's Vladimir Putin. Her far-right party owes a debt to a Russian bank suspected of being close to the Kremlin.

Perennial far-right candidate Marine Le Pen is closer than ever to clinching the French presidency, in the second-round face off that could send shock waves across the world.

Incumbent President Emmanuel Macron is still the clear favorite, but Le Pen is polling far higher than when Macron beat her five years ago.

A Le Pen victory would be a major boon to Russia's president, Vladimir Putin, since Le Pen has long admired him.

In a 2014 interview with Euronews, she praised his "cool head" in the face of what she called a "cold war" waged against him by the U.S.

"I admire that he's managed to restore pride and contentment to a great nation that's been humiliated and persecuted for 70 years," Le Pen said.

A few years later on the BBC, she refused to condemn Putin's annexation of Crimea.

The loan is still being repaid. During Wednesday’s debate, Macron told Le Pen, "You talk to your banker when you talk about Russia.”

Russia's ongoing invasion of Ukraine has forced Le Pen to soften her stance on Russia. On Wednesday, she called the Russian “aggression” against Ukraine inadmissible.

Still, she said last week she wants a NATO reconciliation with the Kremlin “as soon as” the war is over.

“She thinks that in the longer term, there should be a strategic alliance between France, Europe and Russia," said William Drozdiak, author of "The Last President of Europe: Emmanuel Macron's Race to Revive France and Save the World." "And this, of course, would really displace the role the United States has played in Europe, keeping the peace here in Europe for 75 years."

As part of that project, Le Pen wants France, a nuclear power, to play a reduced role in the NATO alliance.

That would be a major setback for the Biden administration and a propaganda coup for the Kremlin.

"You can imagine how they would play up the victory of Marine Le Pen in France, saying that this shows that the Europeans are losing hearts, are losing faith in this American-led effort to support Ukraine," Drozdiak said.

Ukraine aside, analysts tell Newsy the most alarming part of Le Pen’s platform is her desire to ignore EU laws when they clash with her nationalist beliefs.

“It will be another win for Mr. Putin, who aims, as we perfectly know, to destroy, to unravel the European Union," said Nicolas Tenzer, former adviser to the French minister of economy and finance.

But for most French people, foreign affairs is not the most pressing issue.

Le Pen’s campaign has efficiently portrayed Macron as “the president of the rich” at a time when cost of living is rising fast.

The president is far less popular than five years ago when he was a newcomer, but Washington and Brussels hope the French will once more rally behind him nonetheless to once again block Le Pen and her far-right agenda.