Venezuela's Crisis Is Rooted In Oil Prices — And Authoritarianism 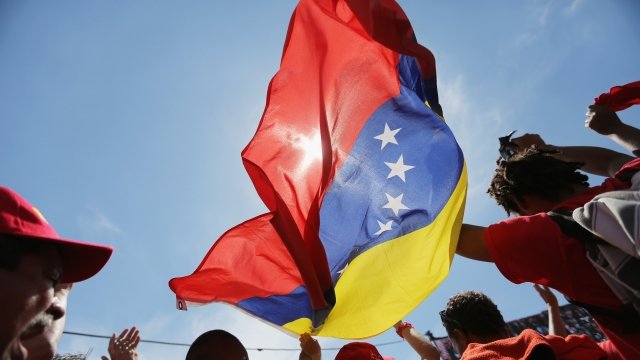 SMS
Venezuela's Crisis Is Rooted In Oil Prices — And Authoritarianism
By Chance Seales
By Chance Seales
October 5, 2018
The economy's downturn is closely tied to its dependency on oil exports.
SHOW TRANSCRIPT

How did Venezuela get to where it is today? Let's begin with "liquid gold": oil. Venezuela was once the richest country in South America. It has the largest known oil reserves in the world, and its economy is rooted in exporting it.

In 1973, the Yom Kippur war in the Middle East caused oil prices to quadruple. The economy boomed. Venezuela had the highest growth rate and lowest inequality on the continent. The government spent more money from 1974 to 1979 than it had in all of history.

But in 1983, oil prices plummeted worldwide and continued to fall over the next two decades. That led to deep government spending cuts. Economic shock led many Venezuelans to believe the system was rigged against them.

Enter: Lieutenant Colonel Hugo Chavez. In 1992, he led a group of leftist military officers in a coup on the government. It failed, and Chavez went to prison. But he became a star. Chavez was a hero for many Venezuelans, symbolizing opportunity.

Chavez got out of jail two years later. In 1998, he was overwhelmingly elected as president. In a series of referendums, Chavez created a new National Assembly and expanded presidential term limits. He also began to nationalize programs, taking over agricultural land in the name of food security, handing out subsidies and creating welfare programs. All of this, he said, was for the people.

This social revolution is nicknamed the Bolivarian Revolution, named after Simon Bolivar. A turning point under Chavez is linked to PDVSA, the state oil company. In 2001, Chavez and his government declared the company must have a majority stake in most of the country's oil projects. This worked as long as oil prices were stable.

But as people began to protest the Chavez takeover, he cracked down, firing 18,000 PDVSA employees — many of them skilled workers. He replaced them with about 100,000 of his supporters. The company was in ruins.

Chavez died of a heart attack in 2013. His hand-picked successor, Nicolas Maduro, narrowly won the presidency. Maduro inherited an economy in shambles. When oil prices dropped in 2014, PDVSA was no longer able to sustain itself.

And Maduro couldn't pay for all of the Chavez-era social programs and subsidies. So he printed more money.

That drove up inflation. Basic goods became unaffordable. Massive protests and street violence are common, and the black market is flourishing.

Many Venezuelans boycotted Maduro's re-election in 2018, where real opponents were excluded. But Maduro won in a vote largely considered to be rigged. In late 2017, food became so scarce that three in four citizens reported weight loss averaging 19 pounds per year. Some call it the "Maduro diet."

About 2.5 million people have fled since 2014. Some had predicted inflation could reach 1 million percent by the end of 2018. At this point, unless oil prices and the economy somehow revive, there's no end in sight to this crisis born of oil dependency and authoritarianism.