The History Of The National Christmas Tree 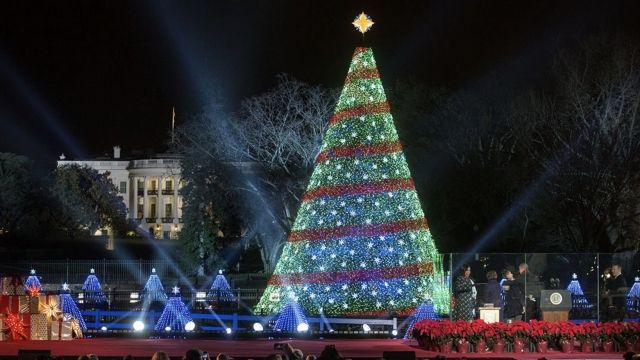 For years, the National Christmas Tree has been illuminated near the White House during the holiday season.

SEE MORE: Dreaming Of A White Christmas? These US Cities Expect It

The long-standing tradition began in 1923 when President Calvin Coolidge was in office.

His wife, Grace, gave the local school district permission to set up a tree decorated with 2,500 light bulbs in President's Park; rumor says it was a way to promote electricity use.

For three decades, the National Christmas Tree was always lit on Christmas Eve.

Which means just hours after President Herbert Hoover did the honors in 1929, he had to deal with the unrelated fire that significantly damaged the West Wing.

During the 1950s, the tree-lighting ceremony was moved up earlier in December. The tree is now officially illuminated at the beginning of the month.

But there were some years the tree wasn't lit at all. From 1942 to 1944, the tree remained dark because of security concerns during World War II.

And in 1979, President Jimmy Carter only lit the tree's star and said the tree would remain dark until the U.S. hostage crisis in Iran was over.

The following year, Carter only turned the tree's lights on for 417 seconds — one second for each day the hostages were held captive. When the hostages were finally freed in January 1981, the tree was quickly decorated and turned on once their plane cleared Iranian airspace.

"I think one of the greatest privileges that a president of the United States has is to light the Christmas tree — the nation's Christmas tree," President Richard Nixon said in 1973.

Commanders-in-chief have sometimes lit the tree remotely. Ronald Reagan did that during his presidency after the 1981 assassination attempt.

And President Harry Truman lit the tree with a remote control from 1948 to 1951 from his home in Missouri during the ceremonies.

SEE MORE: In The UK, The Christmas Season Is The Super Bowl For Commercials

Nowadays, the National Christmas Tree is a permanent fixture in Washington, D.C, surrounded by dozens of smaller trees symbolizing the states and territories.

The tree is only ever replaced if it dies. That most recently happened in 2012 after the previous 26-foot tree died from transplant shock.