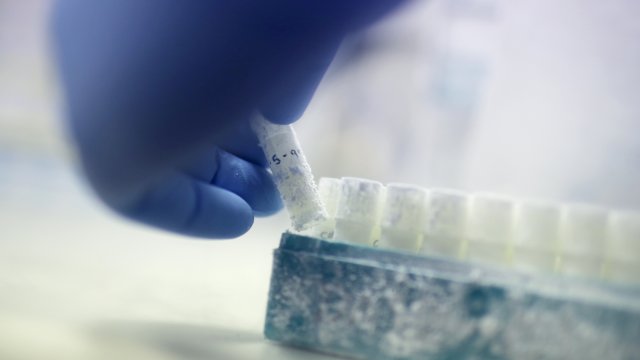 A recent mixup became nightmare for one couple when their fertilized embryo was swapped and inserted into the uterus of another patient.

Thanks to candid conversations from influencers like entrepreneur Anna Victoria and public figures like Sen. Tammy Duckworth and former first lady Michelle Obama, the concept of using in vitro fertilization, or IVF, to achieve pregnancy is becoming more of an open conversation.

According to the latest data from the Society for Assisted Reproductive Technology, or SART, 77,256 babies in the U.S. were born via assisted reproductive technologies in 2019, an increase of more than 2,600 from the year before.

Here's how it works on a basic level: During IVF, mature eggs are united with sperm in a lab. At some point, those fertilized embryos are then transferred to the uterus in hopes of producing a pregnancy.

The technology has opened up new possibilities for families — but it's not without its issues.

A recent mixup turned the now-common practice into a nightmare for one couple when their fertilized embryo was swapped and inserted into the uterus of another patient.

"We never even knew that something like this could happen," said Alex Cardinale. "It wasn't even on our radar. How could this happen? But now we realize that the fertility industry is a mess."

Dr. Emily Jungheim, a professor at Northwestern University’s Feinberg School of Medicine, says occurrences like these are rare. But the growing trend of freezing embryos for future use can increase the potential for mixups.

"When you think about the inventory and the attention to detail and how careful you need to be due to the risk of having all of those things in storage, you could imagine how these types of things could happen," Jungheim said.

The industry has been called out before for a lack of federal regulations. But it isn't completely void of oversight.

For nearly two decades, clinics have been bound by the Fertility Success Rate and Certification Act, which requires embryo labs to be certified by an approved non-federal program. It also requires clinics to report their success rates.

Clinics are also bound by the FDA for matters of drug and device safety.

But federal oversight of the industry as a whole doesn't exist. Instead, it's more self-regulation where some clinics work to meet the guidelines set by the nonprofit SART.

SART members are required to follow industry standards created in part by SART and a group of their peers from the American Society for Reproductive Medicine. They are also monitored to assure things like honesty in marketing and advertising.

According to SART, as of 2018, 86% of IVF clinics were members of their organization.

Still, mistakes can happen. Jungheim says there are ways patients can be their own best advocates.

"What is the certification of the physician that I'm working with there?" She said. "Are they board certified in reproductive endocrinology and infertility? Do I have friends who've gone there who feel strongly about their docs and comfortable with them?"

She also says incidents like this can cause doctors and labs to ask vital questions, too, and make changes for the better.