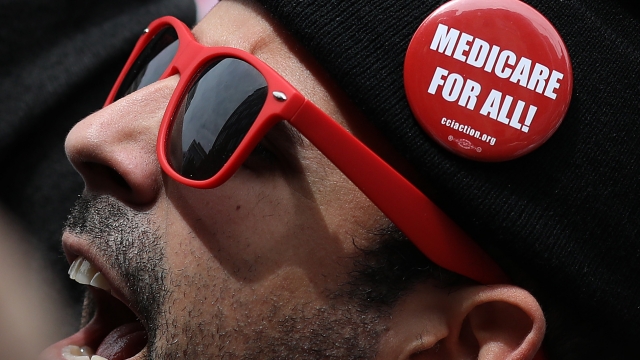 Health care is a major political issue, and Democrats and Republicans are proposing a variety of ways to change our current system.

We're going to explain some of the key terms to help you better understand what options are on the table.

"Single-payer health care" means everyone gets their insurance through the same program. Typically, that system is run by the government and funded by taxes. Single-payer insurance can also put the government in charge of setting prices for health care services. That's the way Medicare, which covers people 65 and older, is run today: The government runs the health insurance program and negotiates with hospitals and doctors to set prices.

"Medicare for all" is a term being used by several Democratic presidential candidates, with Sens. Elizabeth Warren and Bernie Sanders being the biggest proponents. As The New York Times puts it, "Medicare for all" is kind of like a brand-name version of a single-payer system. Both Warren and Sanders' plans would eliminate private and employer-sponsored health insurance in exchange for a single, government-run insurance system that everyone would be enrolled in.

"Public option" is another key phrase in the mix. This type of system would let anyone sign up for government-run health insurance. The program would likely be similar to Medicare, just without the eligibility requirements. But a public option would be just that: an option. People would be allowed to stick with private health insurance if they wanted to.

And there's one health care term that looks at the big picture: "universal coverage." It just means that everyone would have health insurance. This is the ultimate goal for most candidates. But what politicians still need to figure out is which type of health care system will help us get there.