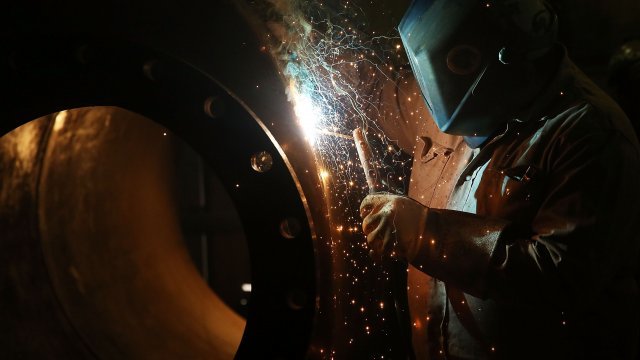 You don't have to be an economist to understand that a skilled workforce is a necessity in a tech-driven economy. Training, and perhaps just as importantly retraining, the workforce is likely to become a recurring challenge — and occasionally an emergency.

A McKinsey report forecasts 39 million to 73 million U.S. jobs could be destroyed by automation by 2030. Although about 20 million of those workers are expected to easily shift to similar occupations, millions will need to be retrained to make a living.

You can't just hop on a mechanized conveyor belt and start pushing buttons. And you certainly can't fix it without first understanding how its computers and parts interact. That's where the challenge comes in.

Politicians and business leaders typically turn to large-scale federal job-training programs. But critics say they're clunky and lack specificity for individual communities. As we hurtle toward automation saturation, the approach is changing.

The federal government is now stressing demand-driven training that is coordinated with local industry. The goal: Make sure workers aren't retrained with new skills that turn out to be obsolete — instead, look for gaps, focus on those, and make workers quickly hireable.

A program at Great Bay Community College in Rochester, New Hampshire, is a good example. With money from a Labor Department grant, local companies teamed up with the nearby college to create the curriculum for a six-month certificate program.  Graduates walk out with new skills and can expect to start at $16 an hour, working in composite manufacturing in their hometown.

A similar program is being launched in Connecticut. Gateway Community College and the New Haven-based Workforce Alliance created a five-week training course aligned with skills needed at local manufacturers. The Skill Up for Manufacturing program is funded with federal and state money and works with the unemployed or underemployed.

This is somewhat similar to training programs in other countries like Denmark, which bring together employers, government and unions to make sure training is focused on the right skills.  What's more, private industry sponsors much of the training in Europe, investing in their own future workers. The programs are always being fine-tuned; despite great effort, some older workers can still struggle in training programs.

This much is obvious: The driving force in training and retraining is now speed. Jobs spring up and fade away much faster in the tech age. Entire companies can have shorter lifespans, meaning many of us could be retrained for a new position several times in the span of our careers.