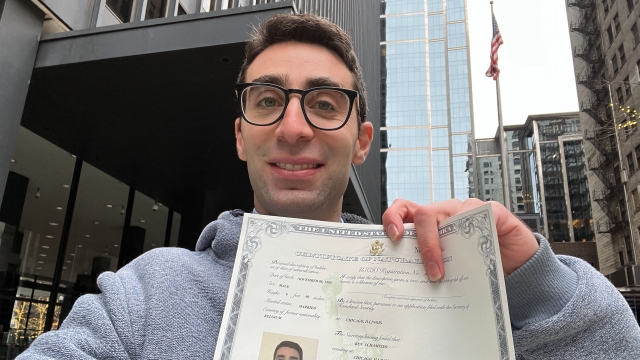 The immigration process includes years of hurdles to get to citizenship — from the initial application, to getting a green card, needing to legally hold it for three to five years and then actually going through the naturalization process.

Newsy's Ben Schamisso and 25 other immigrants became U.S. citizens at a federal courthouse in Chicago last Friday — a solemn and emotional moment years in the making.

"I took the oath and that was it, so I am an American citizen and it feels pretty good, Schamisso said. "It's a new day."

Because his wife is American, he was able to move to the U.S. from Belgium in 2015 with a green card.

He's qualified for citizenship since 2018 but only started filling out the 20-page naturalization form in late 2020.

At the time, the Trump administration planned to soon double the filling fee from $640 to nearly $1,200. The fee hike never materialized, but it did push him to apply.

A year later, Schamisso received an appointment for the infamous naturalization interview — when applicants are tested on their knowledge of English and civics. During the civics part, an officer asks 10 questions from a list of 100, and test takers need six correct answers to pass.

A 2018 national survey found that only 1 in 3 Americans would pass the test. Schamisso passed with one "frustrating" wrong answer.

"The question was, 'What are the three first words of the U.S. Constitution?' and I said quickly, 'We are the people.' Then I said, 'No, it's actually we the people,' but that was too late," Schamisso said.

The interview also includes dozens of questions about the applicant's background.

In the end, it was all worth it, with Schamisso saying the ceremony alone made him proud of the achievement.

The U.S. government naturalized about 625,000 new citizens in fiscal year 2020, and more than 7.3 million immigrants over the last decade.

While Schamisso is from Europe, most naturalized Americans hail from Mexico, India and the Philippines.

The case of his, with his wife sponsoring him, is how it goes in about 28% of cases. Come November, he'll be allowed to vote in U.S. elections for the first time as a new American.