A Different 'Daily Show' Can Still Be Beautiful 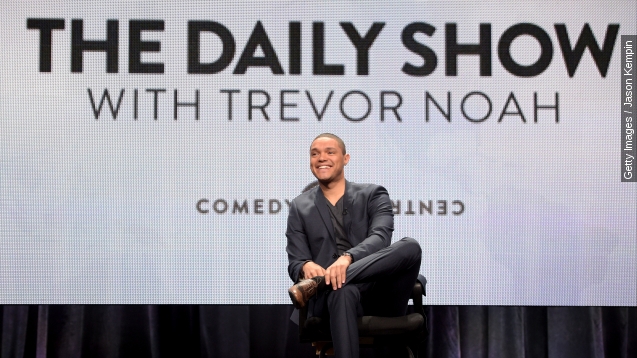 SMS
A Different 'Daily Show' Can Still Be Beautiful
By Cody LaGrow
By Cody LaGrow
September 28, 2015
Many wonder if "Daily Show" host Trevor Noah can fill Jon Stewart's shoes. The South African has a different agenda, so he might not need to.
SHOW TRANSCRIPT

"Same show. Younger, more beautiful people," claimed an advertisement for the the debut of "The Daily Show with Trevor Noah."

"The Daily Show with Trevor Noah" kicks off Monday night with a younger derriere going on the air. It seems the people — or the media, rather — are concerned for their safety.

"How many jokes are you going to be aiming at cable news?" asked CNN's Brian Stelter.

"How many things are you going to be doing that you consider joke-worthy?" Noah responded.

Carrying the torch now is 31-year-old Trevor Noah, who's found himself answering endless questions about if he can fill Jon Stewart's big shoes. Judging by his answers, it seems he's just going to be wearing completely different shoes.

"Are we still covering the election? Yes. Are we still keeping all of our amazing correspondents? Of course. Are we still selling out 'Special Moments' jewelry collection? Only three left. Call now," Noah said in a promotional video.

The South African native will no doubt comment on politics, seeing that Chris Christie is slated as a guest this week, but won't be afraid to stray from Jon Stewart's bread and butter of right-wing criticism and Fox News follies.

Noah told Time: "I don't have targets yet. I get to forge my own relationships. I get to discover the people I know and loathe."

With Noah at the helm, "The Daily Show" will also sport three new correspondents, including Ronny Chieng, Desi Lydic and Roy Wood Jr.

It'll be a more millennial-focused show, where we can expect more commentary on more media outlets, like Buzzfeed and Gawker, more non-American political subject matter and live music — sure to provide a soundtrack to the satire.

Still not convinced? Noah thought you'd be hesitant. At a press conference, he shut up the naysayers by comparing his takeover to Ryan Adams covering Taylor Swift's "1989" album.

"He's done in essence what we've done here — he's taken something that was loved by many, cherished by many and created a new version of it for himself and people have gone, 'Wow, this is actually amazing,'"

Nice T. Swift reference by Noah. Let's hope his ratings score a few #squadgoals of his own.