A Defensive Lineman For MVP? J.J. Watt Could Make It Happen 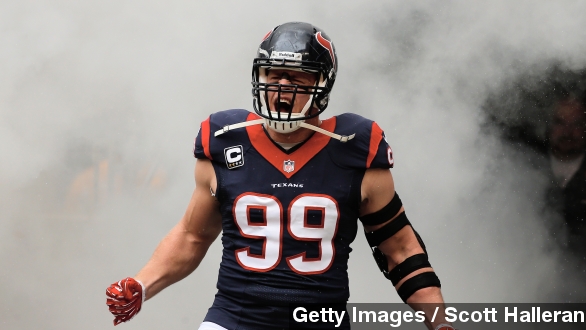 SMS
A Defensive Lineman For MVP? J.J. Watt Could Make It Happen
By Matt Moreno
By Matt Moreno
December 9, 2014
A defensive player hasn't won the AP NFL MVP award since 1986, but Texans DL J.J. Watt could change that.
SHOW TRANSCRIPT

You've got to go waaaaaay back to 1986 for the last time a defensive player won the NFL Most Valuable Player award.

"If J.J. Watt, with the type of season he's having, can't win the MVP then I can't possibly envision another scenario where a defensive player could ever win it," added a CBS Sports reporter.

"He's the MVP if I had a vote," said another reporter from WJXT.

The 6'5", 295-pound Watt leads the league in fumbles recovered and is in the top three for total sacks. Yeah, he's pretty dangerous.

But what might really put him over the edge are his offensive abilities too. The d-lineman has five total touchdowns — two on defense and three on offense.

And MVP voters are taking notice.

Not surprisingly, plenty of headlines are putting J.J. Watt and MVP in the same sentence.

Sports Illustrated's Peter King writes, "J.J. Watt, most of us would agree, is the best player by the widest margin at his position in the NFL." As for his competition outside of his position.

By most accounts it looks to be Green Bay Packers QB Aaron Rodgers. Quarterbacks have long been considered the most important players on the field and Rodgers already has 35 touchdowns with just three interceptions thrown and the league's highest passer rating.

Not to mention, a quarterback has won the award seven of the last eight years. For Watt's part though, he says he's not too focused on whether or not he's leading the MVP race.

He told Sports Illustrated, "It doesn’t matter to me. It’s an award. If people vote for me, great. ... I want to be deserving, but not because I politicked for it. My play on the field is all that should matter. Nothing else."

Watt will look to bolster his resume even more Sunday as he and the Texans take on Indianapolis. The AP NFL MVP will be announced at the conclusion of the season.