A Dallas Cowboys Bus Collided With A Van In Arizona, Killing 4 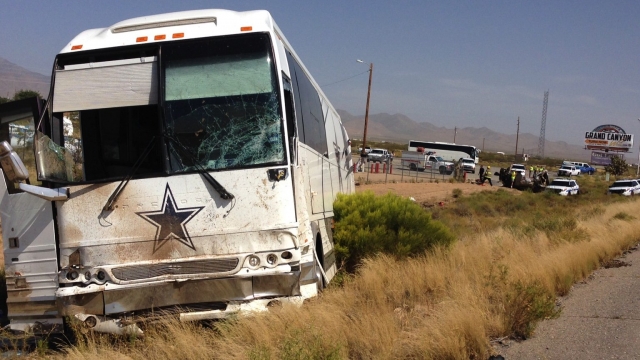 Four people were killed Sunday when a Dallas Cowboys bus collided with a van in Arizona.

The four Dallas Cowboys staff members on board were uninjured — those that died in the crash were riding in the van that collided with the bus. None of the team's players or cheerleaders were traveling on the bus.

The Arizona Department of Public Safety says the van made a left turn and collided with the bus in an intersection.

SEE MORE: Politicians Pandering To Voters Via Sports Is Often A Swing And A Miss

The Cowboys staffers were headed to a meet and greet with fans in Nevada as part of a road trip set to end in Oxnard, California, at the Dallas Cowboys' training camp.

Cowboys' owner Jerry Jones said in a statement, "We as an organization are deeply saddened, and our thoughts, prayers and concerns at this time are with the family members and loved ones of all who were lost."

The opening ceremony for the Cowboys' training camp is this Saturday.

This video includes an image from Arizona Department of Public Safety and Getty Images and clips from KSNV and KLAS.