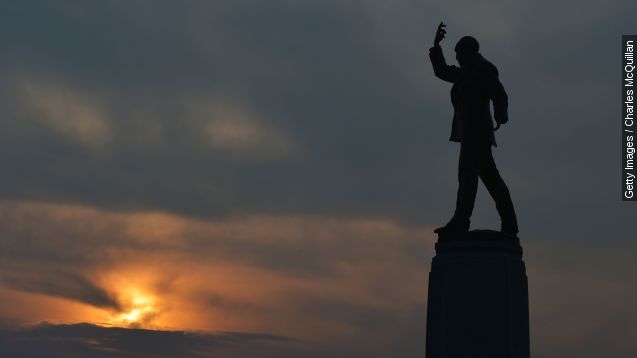 SMS
A Crash Course On N. Ireland's Latest Political Crisis
By Matt Picht
By Matt Picht
September 10, 2015
Northern Ireland's government is on the brink of falling apart. Here's a brief guide to the basics of the region's political strife.
SHOW TRANSCRIPT

The political future of Northern Ireland is in jeopardy following the mass resignation of several politicians from key government posts.

Their abdications could reshape the face of Northern Ireland, but it can be a bit tough to understand from the outside. Here's a brief guide to the key parts of the region's latest political crisis.

Northern Ireland is the part of the country that still technically belongs to the U.K., and how locals feel about that probably determines their politics. Unionist parties want Northern Ireland to stay part the U.K., while Republicans favor more independence.

Armed conflict between the two sides — widely known as The Troubles — ended with 1998's Good Friday agreement, which set up a power-sharing system that lets the unionists and republicans govern side-by-side. The arrangement has been fractious at times, but seemed to be working in recent years.

The most recent crisis was triggered by a pair of killings that unionists have tied to former members of the Irish Republican Army, an infamous republican paramilitary group which supposedly rejected violence long ago.

The sudden reappearance of what looks like Troubles-era violence has led almost every unionist minister — including the government's leader, First Minister Peter Robinson — to leave office in protest.

The exodus hollows out Northern Ireland's executive branch and makes it almost impossible for the remaining ministers to govern effectively. Almost half of Ireland's Assembly is made up of unionists; republicans need their support to pass laws.

Former Finance Minister Arlene Foster will be acting as First Minister for six weeks, giving both sides a bit of breathing room to reestablish a government under the existing power-sharing arrangement.

If the talks fall through, the region will hold another election and try to form a new government. If that doesn't work, the U.K. could step in and suspend the assembly, taking back control of all powers devolved to Ireland.

The move would stabilize Ireland's politics but severely anger the republicans and damage Ireland's slow procession towards peaceful self-governance. The last time Ireland's government was suspended, it took five years to reestablish another one.