A Court Challenge Could Put Indigenous Kids At Risk 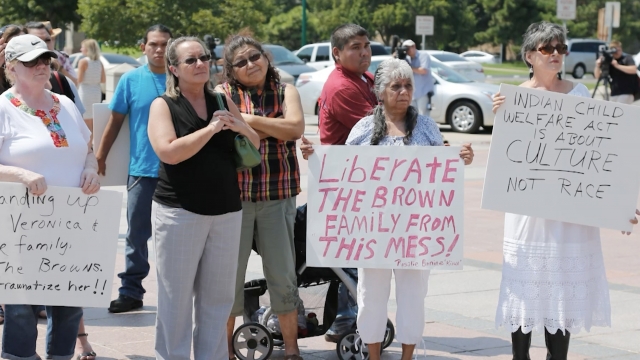 SMS
A Court Challenge Could Put Indigenous Kids At Risk
By Allison Herrera
By Allison Herrera
April 25, 2022
Conservative groups say the Indian Child Welfare Act is unfairly based on race, but tribes worry the challenge could affect their future sovereignty.

Chrissi Ross Nimmo is a Cherokee citizen and a proud mother of three who grew up in Tahlequah, Oklahoma — the capitol of the Cherokee Nation. She's also the Deputy Attorney General for the Cherokee Nation, making her one of the leading attorneys defending the Indian Child Welfare Act, or ICWA — the 1978 law that was passed to keep Native American children from being separated from their families and communities.

So why does she do it?

"First of all, it's tribal children, and you don't have a tribe if you don't have citizens," Ross Nimmo said. "And if you aren't able to hold onto and keep connection with those youngest citizens of your tribe, you have issues down the road."

But not everyone sees it this way.

A group of parents, their lawyers and a conservative think tank known as the Goldwater Institute in Arizona have taken their challenge of the law all the way to the nation's highest court.

The case is known as Brackeen v. Haaland and is scheduled to be heard this fall during the U.S. Supreme Court's next term.

Timothy Sandefur, who has represented non-native clients wanting to adopt native children, is Goldwater’s chief litigator. He says the law is race-based and is therefore unconstitutional and that it deprives non-native people of their rights to adopt the child of their choice.

"It quite actually ends up harming Native American children and their parents in a variety of ways," Sandefur said.

Tribal attorneys, legal experts and Indigenous parents say the 44-year-old law does the opposite: It was passed to undo the harm of a century of boarding school policies that stripped native children of their language, culture and ties to their community.

These policies continued in the 1950s and '60s when the Bureau of Indian Affairs sponsored the Indian Adoption Project.

David Simmons is a policy expert with the National Indian Child Welfare Association.

"25 to 35% of all native children were estimated to have been removed and placed in some kind of out-of-home care, whether it be foster care or institutional care, and for many tribes, especially small tribes, this had them teetering on the edge of extinction with this number of children being removed," Simmons said.

One press release in 1964 from the Bureau of Indian Affairs repeated a racist trope while celebrating native child removal: "One little, two little, three little Indians — and 206 more — are brightening the homes and lives of 172 American families, mostly non-Indians, who have taken the Indian waifs as their own."

Mothers recounted how they were pressured into giving up their children.

“It was pretty much decided for us," Tracy Angus said. "The doctor gave me a private attorney, and we never talked about the end result of Lukas being born and if I was going to keep him and raise him."

Officials from The National Indian Child Welfare Association said large, out-of-home placements for native children were done in part due to poverty, which state agencies classified as "neglect."

"And oftentimes, neglect really is code for families who are struggling with poverty or unemployment or substandard housing, lack of transportation — all of those basic needs," Simmons said.

Even today, Ross Nimmo explains the number of native children in foster care is overrepresented in comparison to what the overall native population is.

"So you still see these disproportionate rates of Indian children in custody based on their population in the state," Ross Nimmo said. "I think what those numbers would look like without ICWA."

Advocates for native children and families explain there is a fundamental lack of understanding of native culture and parenting, where aunts and grandmas sometimes take care of children for an extended period of time.

Part of the law also requires that everything possible be done to reunite the child with their family. If that can’t happen, the child's relatives must be considered, and barring that, a native couple.

Advocates for children, native and non-native, say this is what makes ICWA the gold standard for child adoption laws.

Tribal nations believe a lot is at stake when Supreme Court justices hear this case.

And that brings the act’s legacy in full focus.

"The legacy of the Indian Child Welfare Act is the importance of Indian children to their tribes, to their individual families and to their communities," Ross Nimmo said. "And I think we're seeing a revival of people being proud to be Indian, and they're being proud of being connected to their tribe."