Charlottesville Survivors Reflect On The Wedding Of A Lifetime 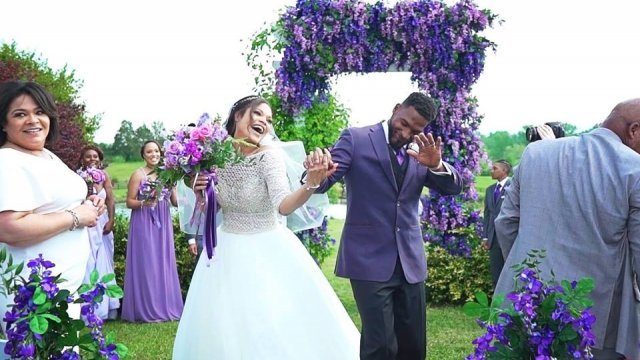 SMS
Charlottesville Survivors Reflect On The Wedding Of A Lifetime
By Jamal Andress
By Jamal Andress
August 10, 2018
After suffering an awful loss during 2017's Unite the Right rally, Marcus and Marissa Martin were given the wedding of a lifetime free of charge.
SHOW TRANSCRIPT

Marcus and Marissa Martin were married in May 2018 and for the most part they are typical newlyweds. Holding hands, walking in lockstep and arguing over who approached who.

"That's where it gets kind of sticky about who's the holler'er and the holler'ee. I saw him and he saw me I didn't go over there initially. But I saw my friend went over there like to see somebody she knew. So I was like 'Oh, here's my chance,'" Marissa Martin said.

"I was looking this way and I turned back around and it was like 'Oh, how you doing?'" Marcus Martin responded.

And while married life has been typical so far, their love story leading up to that marriage is anything but.

Last year, white nationalists gathered in downtown Charlottesville for the now-infamous "Unite the Right" rally. Marcus and Marissa were amongst the hundreds of counter-protesters who took to the streets in opposition.

"This is our city. We work here. You know, we come here, we hang out here. Who's to say we wouldn't get harassed? So it's like, no, you're not going to come to our city and not meet resistance," Marissa said.

Shortly after a state of emergency was declared in Charlottesville, many of the counter protesters gathered on 4th street.

Marissa said, "Honestly when we were there right before, like the minutes before the car attack, it was happy. I mean it was it it was a certain sense of fun. It was clowns in the street."Marcus added, "Knowing they had told them to leave so we felt like we won. So we were happy and cheerful and then boom."

When a Dodge Charger drove down 4th street into a crowd of peaceful protesters Marcus managed to push Marissa out of harm's way. But Marcus was hit by the car, then flew over the hood and was ultimately captured in this now infamous photo from that attack.

"Then everybody's coming up to you just like 'You need some help?' I'm like, 'Where's Marissa? I need you to go find Marissa.' And then when I laid eyes on Marissa that's when I can worry about myself," Marcus said.

Heather Heyer, who was with Marcus and Marissa on 4th street, was killed during the attack. Heyer worked with Marissa at Miller Law Group in Charlottesville.

"She was a sweetheart, she was an amazing soul. I told Heather's grandmother you know, I know she was happy I feel like her personality and her presence and her activism you know regardless of how it was is part of the reason her message is so strong. It's love over hate," Marissa said.

In the aftermath of the attack in Charlottesville, tragedy finally gave way to some blessings for Marcus and Marissa.

Not only that but a GoFundMe page created on Marcus' behalf raised 61,000 to help with his medical bills. By the time the wedding came around, Marcus and Marissa had a whole team that were all providing their services free of charge.

"I mean they made a dream come true. It was mind blowing. It was truly the best day of my life," Marissa said.

"Like everything, everything about that day. I still look at a video today," Marcus added.

"It's a crazy feeling. Like to know, I didn't ask for it. They did it because they wanted to. Because they believed in us and our love story. And they wanted us to have something special after we went through something so tragic," Marissa said.