A Candidate's Guide To A More Civil Presidential Debate 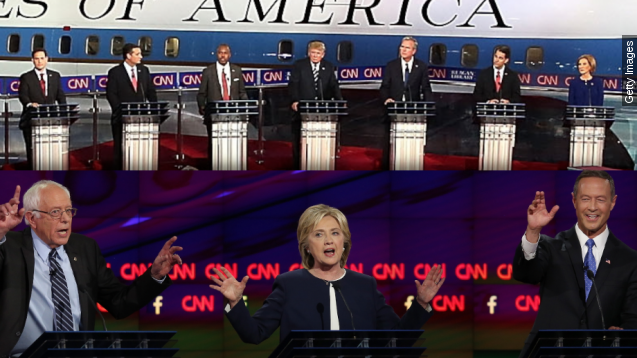 SMS
A Candidate's Guide To A More Civil Presidential Debate
By Eugene Daniels
By Eugene Daniels
October 28, 2015
Sometimes in debates, presidential candidates are baited into attacking each other. Here are the five best ways to dodge the loaded questions.
SHOW TRANSCRIPT

"Mr. Trump later said he was talking about your persona, not your appearance. Please feel free to respond what you think about his persona," debate moderator Jake Tapper asked candidate Carly Fiorina.

"I think women all over this country heard very clearly what Mr. Trump said," Fiorina said.

"I think the voters will make that determination," Bush said.

"I think we need someone that has the best in ethical standards as our next president. That’s how I feel," former candidate Lincoln Chaffee said about Hillary Clinton's email scandlal.

"Secretary Clinton, would you like to respond?" debate moderator Anderson Cooper asked.

"If I were sitting at home and watch thing back and forth, I would be inclined to turn it off," Ohio's governor John Kasich said.

"We have a lot of issues coming up, sir," Tapper tried to explain.

"Now, I know that it may be buzzing out there, but I think it’s important we get to the issues, because that’s what people want, and they don’t want all this fighting," Kasich said.