A Brief History Of The Classic Cardinals-Cubs Rivalry 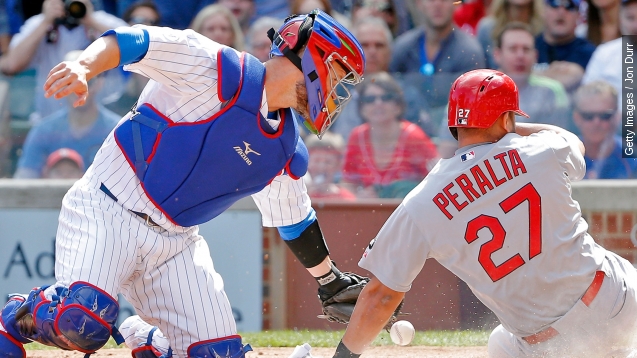 SMS
A Brief History Of The Classic Cardinals-Cubs Rivalry
By Matt Moreno
By Matt Moreno
October 8, 2015
The St. Louis Cardinals and the Chicago Cubs will face off in the NLDS starting Friday.
SHOW TRANSCRIPT

This postseason, baseball fans will get to experience one of the game's longest-standing rivalries.

"I'm going to all three games in St. Louis. I want my Cardinals well-done, roasted," one Cubs fan told WMAQ.

"We found this pig on the way over here. We saw he was a Cubs fan, so we're going to take care of him," a few Cardinals fans told KTVI.

The St. Louis Cardinals and Chicago Cubs are meeting in the postseason this year for the first time ever.

Which is impressive. They've played against each other 2,363 times since 1892. But they've only had the chance to meet in the playoffs since 1995 — the first year MLB adopted the wild card.

As for World Series wins? (Spoiler: It's a bit more decisive.)

Thanks a lot, billy goat.

But if this series is anything like the teams' last meeting —

"The next time they do that, we're going to run. I want everybody to know that. I never read that particular book that the Cardinals wrote regarding how to play baseball. ... I don't give a crap about that book. I want everybody there to understand that we don't start stuff, but we will stop stuff," Cubs manager Joe Maddon said.

This video includes images from Getty Images, The Library of Congress and Brian Boucheron / CC BY 2.0.