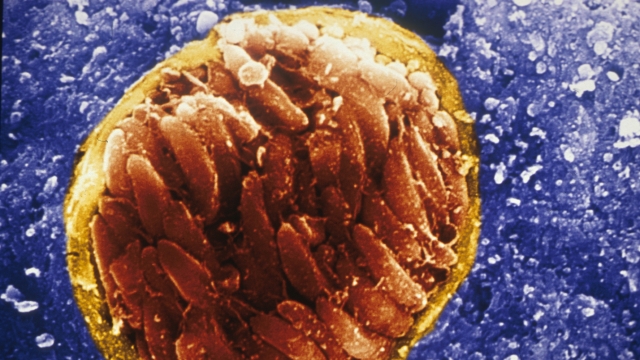 SMS
A Brain Parasite Might Be Making Us Angrier
By Steven Sparkman
By Steven Sparkman
March 23, 2016
Toxoplasma gondii, a parasite once generally considered harmless, has been linked to mental illness, suicide attempts and now aggression.
SHOW TRANSCRIPT

More and more studies are hinting that our brains might not be completely our own. The parasite Toxoplasma gondii, Toxo for short, may be changing human behavior — perhaps even making us angrier and more aggressive.

Toxo is one of those frightening parasites capable of controlling its hosts. It reproduces in the stomachs of cats, and it's always trying to get back inside one. So when an animal, usually a mouse or rat, becomes infected through contact with cat poop, the parasite gets into the rodent's brain and literally rewires it. Basically, it makes its host fall in love with cats so it'll go find one and get eaten.

Humans can contract the parasite, too, through eating unwashed vegetables or undercooked meat. And, obviously, through cat poop. But while it can pose problems for pregnant women or people with weakened immune systems, it's generally not considered a threat to human health.

That's lucky because Toxo is incredibly common. Around a third of people in the world and more than 1 in 5 in the U.S. are infected, and the vast majority never suffer any ill effects. At least, that's what we thought.

What does all of this mean? Well, it's too early to say. None of the studies so far are considered proof that Toxo is driving changes in human behavior. Its effects might be overhyped due to its creepiness.

But because it's so common, if infection really does raise the risk of mental illness even slightly, that could translate to tens of millions of cases.

This video includes a clip from CBS and images from David Ferguson, Hu and Murray / CC BY 4.0, U.S. Department of Agriculture, Wendy Ingram and Adrienne Greene / CCAL, Nephron / CC BY SA 3.0 and Laughlin Dawes / CC BY 3.0.