A Bomb Test Might Have Caused An Earthquake In North Korea 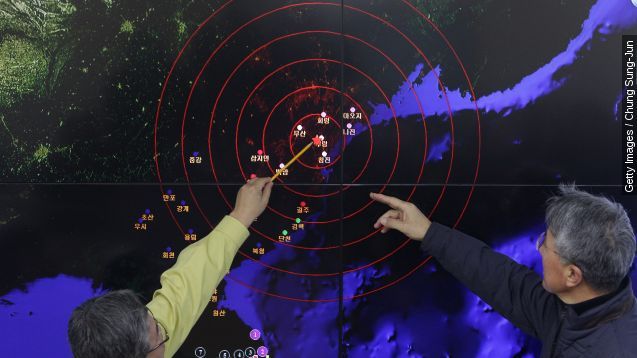 North Korean media claim the country tested a hydrogen bomb on Wednesday. A 5.1 magnitude earthquake was detected in the country's northeast.

North Korea's state-run media says the country has a hydrogen bomb to use "for self-defense," specifically against the U.S. and South Korea. The country reportedly tested the bomb Wednesday.

A 5.1 magnitude earthquake was detected in the northeast part of the country. Tests showed the quake was unnatural, which makes sense, because it was allegedly caused by the bomb detonation test.

Over time, bombs have become lighter and, when combined with missiles, can target specific locations. (Video via U.S. Navy)

Some experts say it's unlikely North Korea's bomb is compact enough for missile usage. If confirmed, this would be the country's fourth bomb test since 2006.

The U.N. council has called for an emergency meeting that is expected to take place Wednesday.

Several countries, including China, Russia, the U.S. and members of the European Union, have condemned North Korea's actions as a violation of international law.