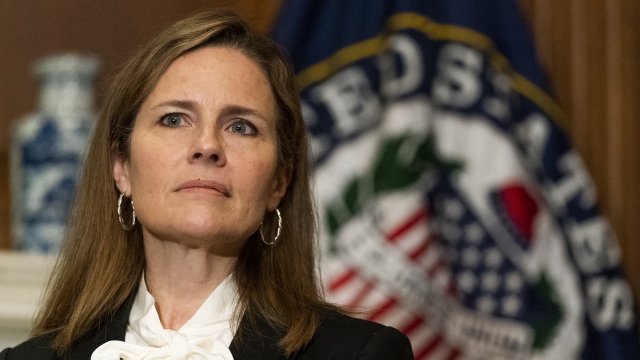 SMS
A Barrett Confirmation Would Be The Fastest In Recent History
By Newsy Staff
By Newsy Staff
October 12, 2020
The vote on Barrett's confirmation is expected to be very much along party lines.
SHOW TRANSCRIPT

The confirmation processes for Justices Kavanaugh, Gorsuch, Kagan and Sotomayor lasted between 65 and 89 days from nomination to vote.

The shortest confirmation process in recent memory was that for late Justice Ruth Bader Ginsburg. Hers lasted 42 days when she was confirmed in 1993.

President Trump nominated Barrett at the end of September, just 37 days before the election.

Here's a look at the current Supreme Court, and what it could look like if Barrett is confirmed.

Justices Sotomayor, Breyer and Kagan were each nominated by Democratic presidents. Those three have historically decided with the liberal wing of the court.

Justices Roberts, Thomas, Alito, Kavanaugh and Gorsuch were nominated by Republican presidents and have historically decided with the conservative wing of the bench.

Roberts, notably, has ruled with the liberal bloc of the court on occasion.

Barrett would be the sixth justice nominated by a Republican and would join the conservative bloc of the court based on her past record on the law.

The vote on Barrett's confirmation is expected to be very much along party lines. That follows recent confirmations that narrowly passed in the Senate.

Brett Kavanaugh got just 50 votes in his confirmation, only one from a Democrat.

The Senate voted 54 to 45 to confirm Neil Gorsuch, with just three Democrats voting in favor of confirming.

Justices Kagan, Sotomayor and Alito all received between 58 and 68 yay votes for confirmation.

In the 1990s and early 2000s, the confirmation votes were much more bipartisan.

Just nine senators voted against Stephen Breyer, who was nominated by President Clinton.

Justices Ginsburg and Souter both received at least 90 votes.

Clarence Thomas was confirmed by a more narrow margin after allegations of sexual harassment against him.