9 Out Of 10 People On Earth Are Breathing Polluted Air 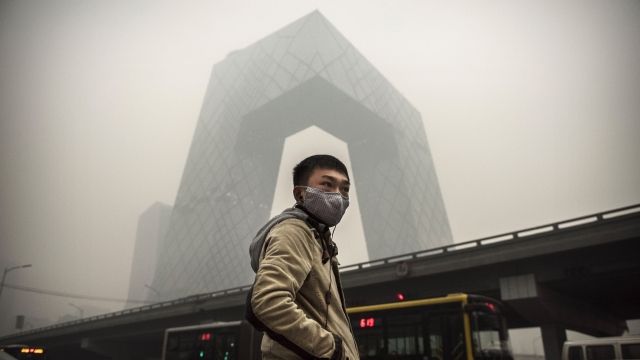 SMS
9 Out Of 10 People On Earth Are Breathing Polluted Air
By Ryan Biek
By Ryan Biek
September 27, 2016
The World Health Organization has released its most comprehensive study yet on outdoor air pollution.
SHOW TRANSCRIPT

Ninety-two percent of people on Earth are breathing polluted air.

The World Health Organization released its most complete analysis yet of outdoor air quality. According to the agency, 3 million people die every year in connection to unhealthy air.

These pollutants are microscopic but are known to lead to lung cancer, strokes and heart disease.

The WHO's interactive map shows that the most polluted areas of the world are concentrated in low- and middle-income countries.

Location is partly to blame for some of the high pollution levels. Some factors, like dust storms, are out of humans' control.

But the WHO also said inefficient energy use and transportation contribute to the poor air quality.

These factors are part of the reason China, despite being a wealthier country, has the sixth-highest death rate in connection to air pollution.

The U.S. seems to have relatively good air. It's better than most of Europe, though that is mostly due to Europe's farming practices and dependence on diesel fuel.

The WHO says the world needs to take action, and fast, through sustainable transport, waste management and renewable energy.