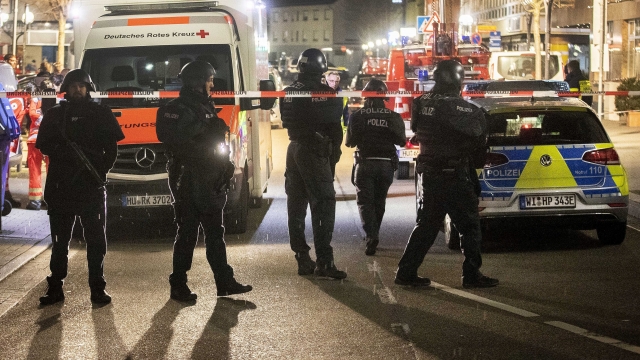 A gunman attacked two hookah bars in Hanau, Germany, Wednesday night, killing nine people. Multiple others were injured, including at least one who is in serious condition.

Hanau is a city of 100,000 residents located about 12 miles east of Frankfurt. Some of the victims were reportedly of Kurdish descent.

The region's interior minister told reporters that police were able to identify the suspect through surveillance video and witness statements.

Police later found the suspect dead in his home, along with the body of his mother. Officials believe the suspect killed himself after the attack.

Authorities have identified the suspect as a 43-year-old male. To avoid giving notoriety to perpetrators, Newsy does not name shooters or shooting suspects in mass casualty events.

Federal prosecutors are investigating the shooting as an act of terrorism.  A spokesman for the prosecutors said they've found evidence that the suspect had a "right-wing extremist background."

As part of their investigation, authorities are evaluating a website that is believed to belong to the suspect.

German Chancellor Angela Merkel condemned the attack Thursday, saying "racism is a poison; hatred is a poison. This poison exists in our society, and it's to blame for far too many tragic events."

Additional reporting by Michael Probst and Frank Jordans of the Associated Press. Contains footage from CNN.