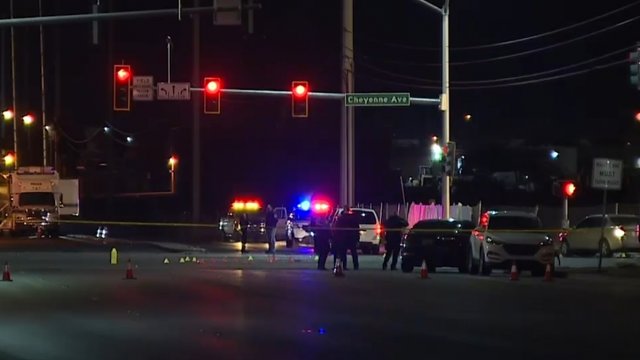 SMS
9 Dead After Chaotic Car Crash In Las Vegas
By Newsy Staff
By Newsy Staff
January 30, 2022
Officials said the driver of a Dodge Charger was speeding, ran a red light and plowed into several cars.

A six-vehicle crash killed nine people and left one person in critical condition in Nevada, and police are trying to determine if a driver was impaired before running a red light, causing the collision.

Las Vegas police said the driver and a passenger were among the dead after Saturday's crash and the ages of the other victims ranged from juveniles to middle-aged adults. A Nevada intersection remained closed Sunday as authorities investigated.

Two people were taken to a hospital where one died and the other was in critical condition, according to North Las Vegas police.

They said the identities of the driver and the other eight people killed would be released by the Clark County coroner's office.

In all, 15 people were involved in the crash.

"We have not seen a mass casualty traffic collision like this before," police spokesman Alexander Cuevas said at a news conference. Cuevas said the crash was reported at 3 p.m. after the driver struck multiple vehicles, causing "a chaotic event."

Some of the vehicles struck were pushed into a vacant lot on the intersection.

"Our thoughts and our prayers are with the families who are experiencing a tremendous and unnecessary loss due to a careless and senseless act," North Las Vegas Councilwoman Pamela Goynes-Brown said.

"Please make this a safer community by slowing down. Pay attention to speed limits," Cuevas said.

According to authorities, 2021 was the deadliest on Nevada roads in 14 years. The state reported 382 traffic fatalities last year, an 18% increase over 2020's total.