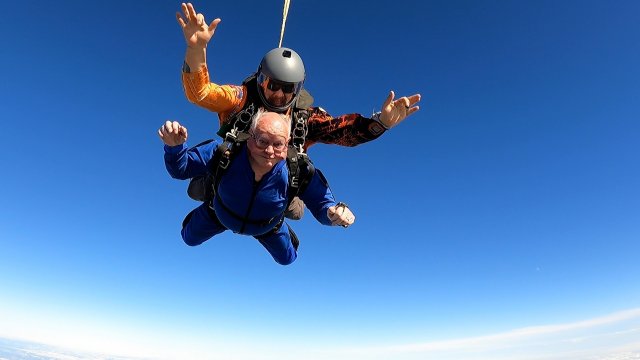 On Veterans Day, three generations of a family who all served in the armed services decided to take a giant step out of an airplane, 14,000 feet above the Houston area.

Lake is an 88-year-old Army veteran who served in the Korean war and was an advance man for President Gerald Ford. He says he had bugged his son for years that he'd like to skydive one last time.

"There's the saying that when you do this, you're going to be able to stand on your own two feet, and they were right," Lake said.

At first, Lake's son, Fred Jr., a Coast Guard veteran, didn't think he could deliver for his dad.

Then, he saw a story on the network news about skydiving grandmothers.

"It was this organization that was organizing bucket wishes to the elderly," Fred Jr. said.

He then reached out to the organization's founder.

"We endeavor to help low-income seniors do things on their bucket list so they're not isolated," Webb Weiman, founder of MyJump, said. "When you serve our nation, you climb to the top of the list quick."

Fred Jr. pitched Weiman the idea of three generations jumping together, as the grandson served in the Marine Corps. But there is one caveat — Freddie Lake, veteran number three, is like his dad ... both are averse to high altitudes.

With the help of MyJump, Fred Jr. made it happen. Despite those jitters, they gave an 88-year-old man a gift.

"Just knowing it's something that my grandpa really wanted to do and what he has done, I mean, you know, I guess it's the Marine mentality in me that I've always got to," Freddie Lake said.

Despite a rain delay near Houston, the trio sailed through the sky and landed within minutes.