87 Percent Of Women In The House Of Representatives Are Democrats 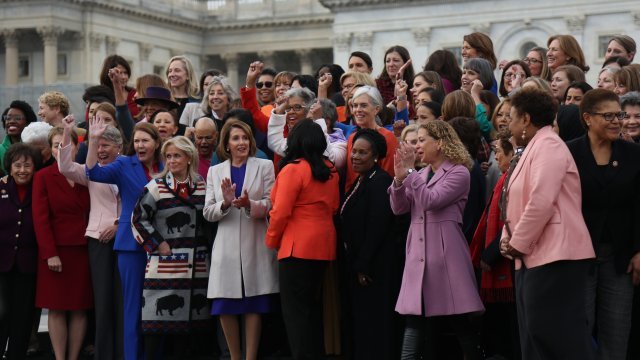 House Democratic women were overflowing the three-tiered riser as they posed for their group picture the day after being sworn in.

There are now 102 women in the House: 89 Democrats and 13 Republicans. Democrats added 35 new Democratic members to Republicans' one in what was dubbed the year of the woman. Congresswoman Cheri Bustos, one of the newest members of House leadership, spent the last few years recruiting candidates across the country. Her work is starting to pay off.

Bustos is advising new members to build relationships not just within the Democratic caucus but across the aisle. Her primary advice to new women in Congress is very serious: "Don't wear heels. When you're doing all the walking we do, it kills by the end of the night!"

It's something freshman Congresswoman Deb Haaland has heard a few times since stepping foot inside the Capitol.

"I have women who advised me to wear comfortable shoes. It's just a challenge getting through the halls and getting our bearings, and I'm grateful for all the help I've received."

She's one of the first two Native American women elected to Congress. The single mother's pride was palpable as she was sworn in Thursday.

"My mom was sitting in the gallery," she explained. "She's a veteran, she uses a wheelchair, she lives in a small rural community, it's people like her that I come to Congress to represent."

Both these representatives say having more women in Congress will shake up the dynamics of Capitol Hill, for the better.

"We're natural collaborators and relationship-builders. Whether you're a Democrat or a Republican, we're going to find ways to work together," Bustos added.

After all, there are more women in the House than ever before. That means there will be representation pretty much everywhere you look.