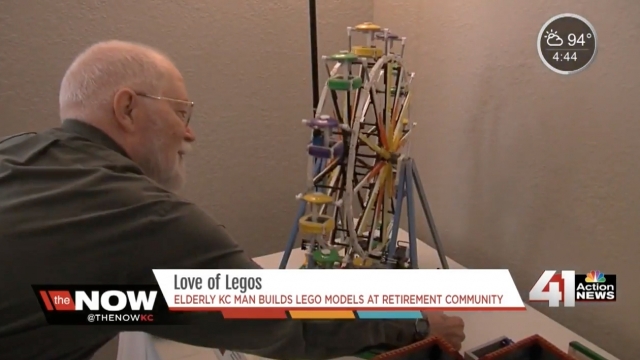 A Kansas City man has constructed more than 60 Lego models and displays some of them at his retirement community.

"Gonna have to do a little repair on this one," Bill Fields said to KSHB.

Fields — who lives in a Kansas City, Missouri, retirement community — puts the Lego models he's built on display, including a Lego replica of R2-D2 from "Star Wars" and a ferris wheel that actually rotates.

"You just dump 5,900 pieces out on the table and start hunting," Fields said.

The Jackson County Advocate reports Fields tries to stop by one of the Lego stores in New York City whenever he's there visiting family.

He's even trying to convince the company to start selling kits for its large-scale Lego models sprinkled around its stores, including one for its large Empire State Building.

Fields told KSHB that working with the Lego toys allows him to stay young.

"I think it keeps my mind active and also helps with my hands," Fields said.

In total, Fields has created more than 60 Lego models. It takes him about four days to build one.

This video includes clips from Lego and images from Deepti Hari / CC BY 2.0 and Loozrboy / CC BY SA 2.0.