8 More Arrested After 39 People Are Found Dead On Truck 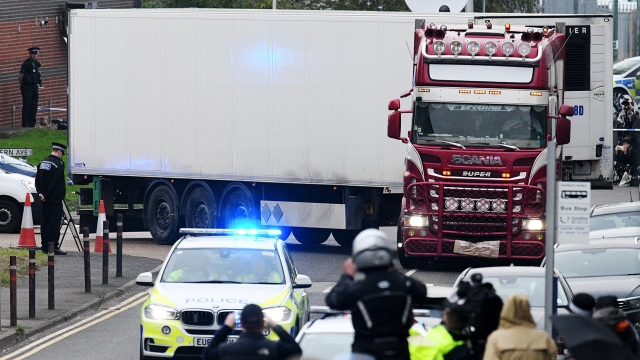 Vietnamese authorities have made eight arrests connected to the deaths of 39 people discovered in the back of a truck last month in England, according to state media.

Two others were arrested in Vietnam Friday. The government-run newspaper reported authorities were also collecting the fingerprints of 21 people "suspected of having relations to the case."

The refrigerated truck was flagged down in Essex on Oct. 23, and police discovered the people inside. Authorities initially believed the people were Chinese "based on the documentation found on them" but later found they were Vietnamese when some people came forward believing their loved ones were on the truck. The truck driver has been charged with 39 counts of manslaughter. Another man was brought to court on an arrest warrant, and detectives have asked two other men to turn themselves in.

Most of the victims were reportedly from northern Vietnam's Nghe An and Ha Tinh provinces, where migration is propelled by poor job opportunities, smuggling gangs and environmental disasters.

The police chief said authorities are treating this as a smuggling incident, not as human trafficking. He said "the best thing to do now is to deal with the consequences of the incident and help family members receive the bodies."