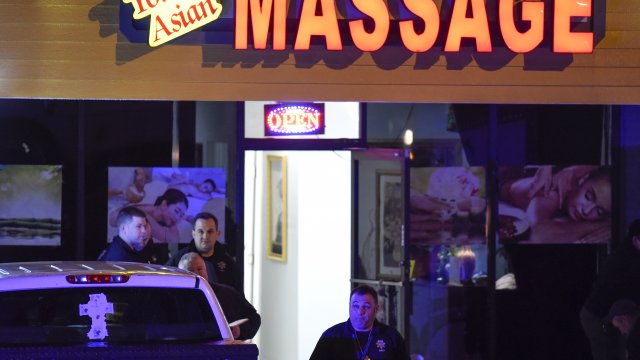 SMS
8 Dead After Shootings At Georgia Massage Parlors
By Newsy Staff
By Newsy Staff
March 17, 2021
A suspect was arrested after three shootings at massage parlors in the Atlanta area.
SHOW TRANSCRIPT

Authorities in Atlanta gave an update today after a deadly shooting spree in the city. Atlanta's mayor said the suspect may have been heading to Florida for more attacks.

They say the suspect didn't suggest race was a factor, and it's too early to call it a hate crime. Six of the eight people killed were of Asian descent.

"Our thoughts and prayers remain with those families, whether it's senseless violence we've seen play out in our streets or more targeted violence like we saw yesterday," said Atlanta Mayor Keisha Lance Bottoms. "A crime against any community is a crime against us all."

The shootings have sparked calls to end violence against Asian Americans. There's been an increase in hate crimes against them during the pandemic. The group "Stop AAPI Hate"said this latest attack will only exacerbate the fear and pain that the Asian American community continues to endure.