8 Dead, 5 Missing After Flash Floods In Utah And Arizona 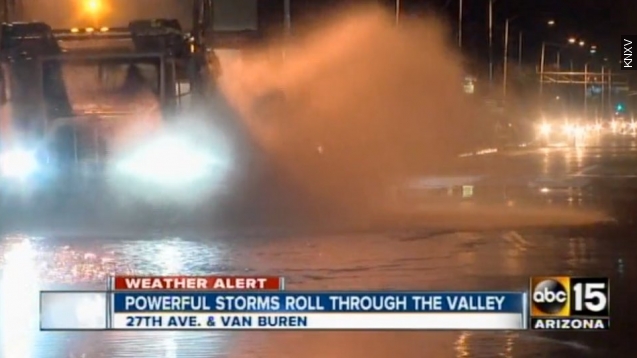 SMS
8 Dead, 5 Missing After Flash Floods In Utah And Arizona
By Matt Moreno
By Matt Moreno
September 15, 2015
The rain started around 5:30 p.m. and caused chaos in southern Utah and northern Arizona. Eight are reported dead and at least five are missing.
SHOW TRANSCRIPT

Flash floods, downed power lines, snapped trees and muddy streets: Residents in southern Utah and northern Arizona are dealing with just about everything mother nature can throw at them right now.

Eight people are dead and another five are reported missing in the area as powerful flash floods crashed down around 5:30 p.m. local time Monday.

"It's a wake up call to the community that it's real. We get these big floods that go down, as long as I can remember, through the short creek. ... This is tragic because I don't recall this kind of fatalities with the flooding," Hildale Mayor Philip Barlow told reporters.

The Hildale, Utah, area was especially hard-hit when a van and an SUV carrying 16 people were swept down the road, trapping or killing many on the inside. The Hildale fire department reports all of the victims were mothers or small children.