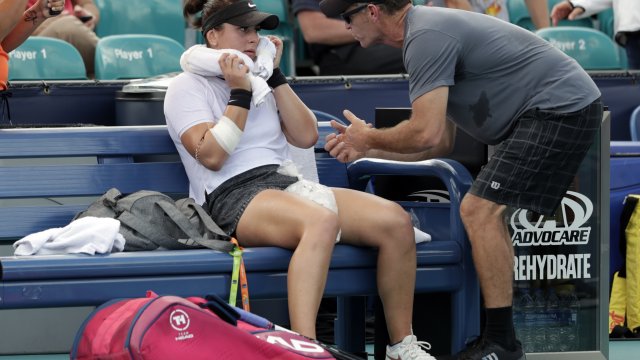 SMS
72 Tennis Players In Quarantine Ahead Of Australian Open
By Alex Arger
By Alex Arger
January 17, 2021
Tennis players are isolated in hotel rooms after being on charter flights that included passengers testing positive for coronavirus.
SHOW TRANSCRIPT

The already delayed Australian Open is facing another speed bump — 72 tennis players have been placed in a strict 14-day quarantine, making them unable to attend practice for days ahead of the tournament.

A charter flight carrying 25 players reported a positive test Sunday, the third flight to do so in the past week. Now... players who arrived without any positive tests on their flights will have five hours of training each day, while others will be confined to their hotel rooms.

Some players were frustrated they had to be restricted just for being on the same flight, but local health authorities say the players were warned in advance of the risks and rules. If they leave quarantine, they could be heavily fined or moved to a different quarantine spot with police guards.

The number of infected passengers is now at five, with no players testing positive so far. Former U.S. Open champion Sloan Stephens and former world number ones Victoria Azarenka and Angelique Kerber are part of the quarantine group.

Even with the players benched for the next two weeks, officials say the tournament will go on as planned on February 8.