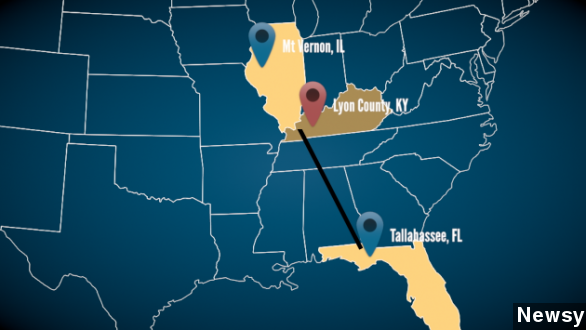 SMS
7-Year-Old Is Lone Survivor In Kentucky Plane Crash
By Madison Burke
By Madison Burke
January 3, 2015
A young girl walked three-quarters of a mile to find help after a plane crash that killed her family members.
SHOW TRANSCRIPT

A little girl walked almost a mile to get help after miraculously surviving a plane crash in Kentucky this weekend.

The seven-year-old girl was on a plane with her parents, sister and cousin headed from Florida to Illinois when the plane crashed in Kentucky.

All aboard the plane were killed in the crash, except for the little girl. Authorities say she walked three-quarters of a mile through rough terrain after the crash before she came to the home of Larry Wilkins.

"Standing there she had blood on her face, blood all over her legs and her arms. ... She was pretty well composed for somebody that just had been through what she went through," Wilkins said.

The FAA says the pilot of the plane reported engine trouble before it lost contact with air traffic control. An ABC analyst explains a lot could have contributed to the crash.

"It's designed to fly just fine on one engine but again it's so heavily loaded, it's nighttime, if you lose an engine it takes a lot of pilot proficiency and we just don't know what was going on in this aircraft at the time," Col. Stephen Ganyard said.

Both the FAA and the National Transportation Safety Board are investigating the crash.

The girl was taken to the hospital to be treated for non-life threatening injuries but has since been released.