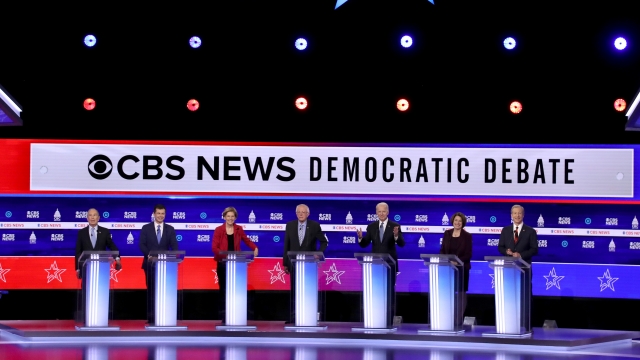 Seven Democratic presidential candidates took the stage in South Carolina Tuesday night for a debate that yielded a lot of this:

[Candidates talking over each other]

"I'm not out of time. He spoke over time and I’m gonna talk. Here's the deal," Joe Biden said.

And this time, it was Sanders who spent much of the night on defense.

"Bernie and I agree on a lot of things, but I think I would make a better president than Bernie," Warren said.

"Bernie Sanders analysis is right. The difference is I don't like his solutions," Steyer said.

"Bernie, in fact, hasn’t passed much of anything," Biden said.

The debate covered a variety of issues, including foreign policy, education and affordable housing. And while in a state where the majority of Democrats are black, the candidates also slipped in a number of comments racial equality.

"See, all of these things are connected. Housing, wages, the ability to get anything meaningful done on criminal justice reform. All of these things are going to be harder to deal with as long as black voices are systematically excluded from political participation, which is happening on everything from the purging of voter rolls to the closing of voting locations," Buttigieg said.

"It is important to recognize the role that the federal government played for decades and decades in discriminating against African Americans having an opportunity to buy homes," Warren said.

On the issue of gun control, the candidates are largely agreed about needing legislative reform. The question was: Who could get it done?

"I have a six million-person organization around this country — Moms Demand Action and Everytown. We have put background checks, we have background checks in 20 states. So you can do it. It's Congress that can't seem to do it, and I don't know why we think they're gonna do it" Bloomberg said.

"The way we do it is having someone leading the ticket from a part of the country where we actually needs the votes. So I have long supported the assault weapon ban. I am the author of the bill to close the boyfriend loophole that says that domestic abusers can't go out and get an AK-47," Klobuchar said.

"In terms of making the case, I think it wouldn't be a bad idea for somebody to illustrate from the perspective of the a veteran why the kinds of weaponry, anything remotely like what I trained on in order to go serve in a war zone has no business being sold anywhere near an American school or church or neighborhood," Buttigieg said.

This was probably the last debate appearance for some candidates. Twenty-one states, four U.S. territories and the Democrats abroad will vote before the March 15 debate in Arizona.