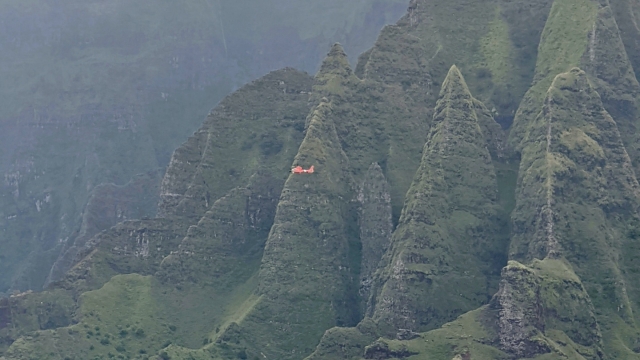 SMS
6 Dead, 1 Person Missing In Crash Of Hawaiian Tour Helicopter
By Ahmed Jawadi
By Ahmed Jawadi
December 28, 2019
​Authorities said they've recovered remains of six people after finding the site of the crash at the top of a mountain on the island of Kauai.
SHOW TRANSCRIPT

Six people were killed and one remains missing after a tour helicopter crash on a Hawaiian island.

Authorities said Friday night they've recovered the remains of six people after finding the crash site at the top of a mountain on the island of Kauai. Although officials said "there are no indications of survivors," a search for the final missing person is expected to resume on Saturday.

A search began for the missing aircraft Thursday evening after the sightseeing company reported the helicopter was overdue on its scheduled return. Authorities did not identify who was on board, but said the travelers included two families, and that two of the passengers were minors. The National Transportation Safety Board said it was sending investigators to the scene of the crash.

Hawaii Gov. David Ige offered his condolences in a statement Friday, saying, "Our thoughts are with the families of those on-board as search and rescue crews work at the site of the helicopter crash."

The cause of the crash has yet to be determined. It was the third helicopter crash in Hawaii this year.