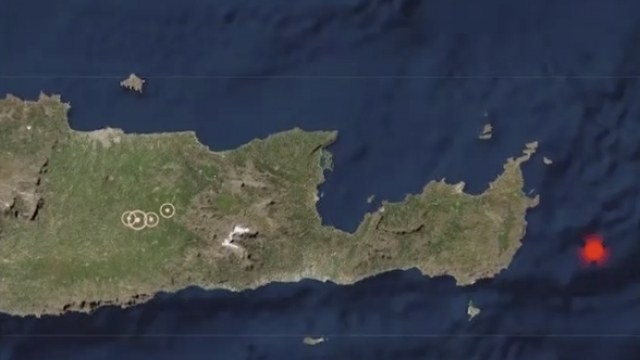 SMS
6.3 Magnitude Earthquake Rattles Greek Island Of Crete
By Associated Press
By Associated Press
October 12, 2021
The Geodynamic Institute of Athens said the quake started off the island's eastern coast and was felt more than 300 miles away but no one was hurt.

A strong earthquake jolted the Greek island of Crete on Tuesday, two weeks and a day after another temblor killed a man and damaged hundreds of buildings.

The Geodynamic Institute in Athens said the undersea earthquake had a preliminary magnitude of 6.3 and occurred at 12:24 p.m. local time off the island's eastern coast.

It was felt as far as the coast of Turkey and on Cyprus, more than 310 miles to the east, authorities said.

Magnitude 4.1 and 4.6 quakes that were believed to be aftershocks took place minutes later, the institute in Athens said. Authorities reported a swell in the sea level around the eastern Cretan port of Ierapetra and advised residents to stay away from the coast.

There were no reports of serious damage or injuries, but a small church near the epicenter that was empty at the time of the quake partially collapsed. Authorities said police and fire crews were checking remote villages in eastern Crete.

“The quake was felt all over the island, and it did cause concern because we are still feeling the aftershocks from the previous quake,” Crete's deputy regional governor, Yiannis Leondarakis, told Greece's state-run radio.

Witnesses said residents of the island’s largest city, Heraklion, went outdoors when the quake struck, while students at many schools on the island gathered outside their classrooms.

Hundreds of people from villages south of Heraklion remain homeless following a 5.8-magnitude quake that struck on Sept. 27. A man was killed while carrying out restoration work at a church that was damaged in the area. Residents whose homes were damaged were moved to hotels and tents set up by the army.