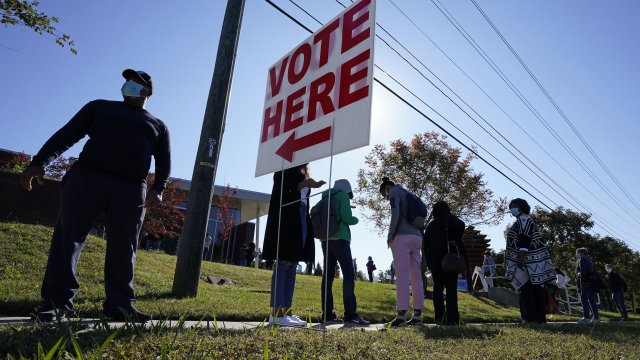 According to a new study, more than 5 million people will not be allowed to vote in the 2020 election because of a felony conviction. That's 2.3% of the total voting-age population — a big percentage in a country where elections are routinely decided by razor-thin margins.

And while some of these potential voters are incarcerated, the vast majority, nearly 75%, are out of prison and living in the community.

Criminologist and professor Christopher Uggen conducted this study for the Sentencing Project.

UGGEN: "Every day, there's a steady assembly line going through the justice system. And the question is, you know, do they ever come off of that line and rejoin the rest of us in society — as citizens standing shoulder-to-shoulder on Election Day?"

A lot of that depends on the state you live in. There are only two states that permit you to vote no matter what involvement you've had with the criminal justice system: Maine and Vermont.

SANDERS: "As it happens in my own state of Vermont, from the very first days our state's history, what the constitution says is everybody can vote. That is true so people in jail can vote. … But I think the right to vote is inherent to our democracy — yes, even for terrible people."

But for states like Alabama, Mississippi and Tennessee, more than 8% of the state's population can't vote because of their criminal record.

Florida was one of the last two states in the country that banned former felons from voting for life before passing a major referendum in 2018 to change that.

Amendment 4 gave 1.4 million former felons the right to vote. But shortly after the law was passed, Republican lawmakers added a restriction, forcing voters to pay any outstanding fines, fees or restitution before they could cast their ballot.

According to the Sentencing Project, this new law will keep more than 900,000 Floridians from voting this November.

Professor Uggen makes a direct link between the disparities in the criminal justice system and felony disenfranchisement, saying one reinforces the other.

UGGEN: "What we've been talking about with Black Lives Matter and law enforcement and courts and racial discrimination and criminal justice, that is all amplified in and transmitted through the political process by the practice of disenfranchisement."

According to the Sentencing Project, one in every 16 voting-age Black Americans nationwide is disenfranchised. That rate is nearly four times higher than non-Black Americans.