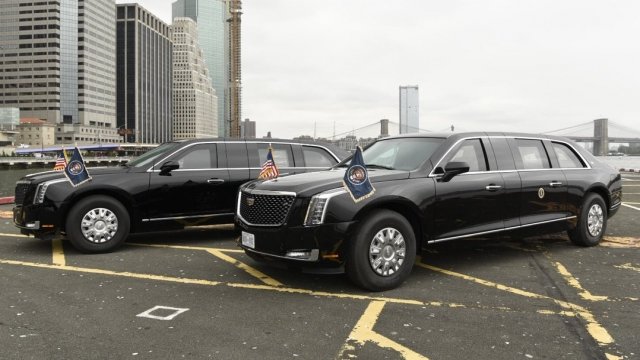 It reportedly weighs nearly 20,000 pounds, can withstand a chemical attack and is full of blood.

"It" is the presidential limo, better known as "the beast." On Monday, the Secret Service tweeted a photo of two limousines that appear to be new presidential limos saying it was "ready to roll into" this year's United Nations General Assembly.

The Secret Service hasn't release any details about the presidential limo, for security concerns.

But according to news reports it can fire tear gas, has tires that can run-flat and its door handles can be electrified. Somewhere inside there's also supposedly a fridge stocked with a supply of the president's blood type.

We do know slightly more about the cost to build the beast. According to official documents, the government awarded a nearly $16 million multi-year contract to General Motors to apparently build this one and others. So based on that info the new presidential limo is estimated to cost about $1.5 million.