On Fox News, Kavanaugh Addressed The Allegations Against Him 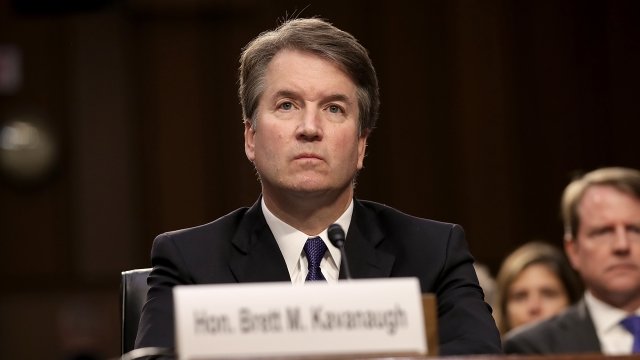 In an exclusive interview with Fox News Channel's "The Story with Martha MacCallum," Supreme Court nominee Brett Kavanaugh again denied the sexual assault and misconduct allegations against him.

"The truth is I've never sexually assaulted anyone, in high school or otherwise," he said.

During high school and "for many years after," he said he was a virgin.

More than 30 years later, he says he's not going to let "false accusations" drive him out of the Supreme Court nomination process.

"We're looking for a fair process where I can be heard and defend my integrity, my lifelong record," he said, which includes "promoting dignity and equality for women."

In less than two weeks, at least two women have publicly accused him of sexual assault and misconduct.

Over the weekend, one of those accusers, Christine Blasey Ford, wrote about her sexual assault allegations against Kavanaugh. In a letter to the chairman of the Senate Judiciary Committee, Chuck Grassley, she said Kavanaugh's actions "while many years ago, were serious and have had a lasting impact on my life."

She then writes her "original intent was first and foremost to be a helpful citizen — in a confidential way that would minimize collateral damage to all families and friends involved.”

Her "one motivation in coming forward," she said is "to tell the truth about what Mr. Kavanaugh and his friend Mark Judge did to me."

Kavanaugh says he too is ready to testify about Ford's allegations against him.

On Thursday, they're both expected to share their side of the story during a hearing with the Senate Judiciary Committee.