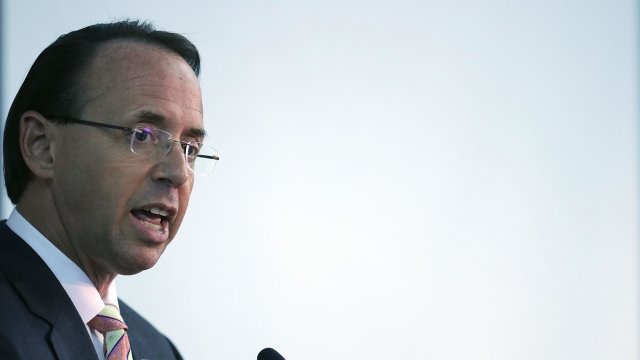 A new report from the New York Times says deputy attorney general Rod Rosenstein considered secretly recording the president and even contemplated removing him from office.

According to the Times, Rosenstein discussed these things in spring 2017, shortly after his confirmation.

Anonymous sources told the outlet the deputy AG was concerned about all the turmoil in the White House following the firing of former FBI Director James Comey. A secret recording could've been proof of President Donald Trump's reportedly erratic behavior.

That's where the 25th Amendment allegedly came in. That allows the vice president and a majority of cabinet members to remove a sitting president from office by declaring him "unable to discharge the powers and duties of his office."

The Times reports that Rosenstein talked to another FBI official about invoking the 25th Amendment, and Rosenstein allegedly said he might be able to get Attorney General Jeff Sessions and then-Department of Homeland Security secretary John Kelly on board.

In a statement to Newsy, Rosenstein called the Times article "inaccurate and factually incorrect." He went on to say, "But let me be clear about this: Based on my personal dealings with the president, there is no basis to invoke the 25th Amendment."