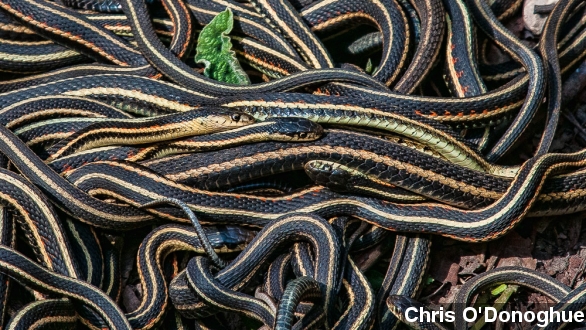 Construction work on a dike in Canada gave hundreds of slumbering snakes a bit of a rude awakening last week.

Workers unearthed a den of more than 500 garter snakes hibernating under rocks in British Columbia. Although garter snakes are harmless, relocating that many of them presented a bit of a problem. (Video via CBC)

The snakes were delivered in buckets and bins to the Wildlife Rescue Association of British Columbia near Vancouver, which is storing them in tubs until temperatures rise outside.

To survive the winter, the cold-blooded garter snakes hibernate together, sleeping for months on end with no need for food and only occasionally waking up for water. (Video via National Geographic)

The behavior, known as brumation, is especially common in parts of Canada, where the geology allows for sinkholes to develop, which present the perfect place for the snakes to hibernate. (Video via Nature North)

The Wildlife Rescue Association plans to return the snakes to the site in the spring.

This video includes an image from Susannah Anderson / CC BY NC ND 2.0.