5 Things You Need To Know About 3D-Printed Gun Blueprints 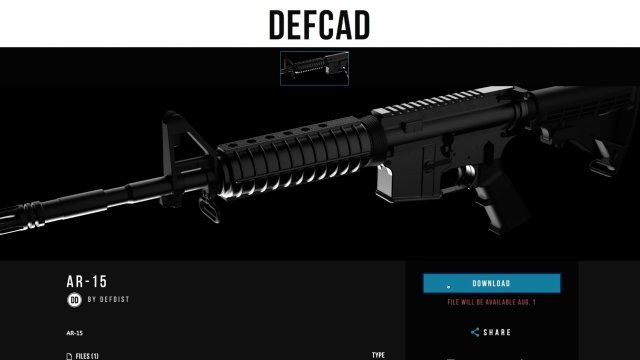 1. It's possible to 3D-print a working gun in 24 hours. Wilson created the first working 3D-printed gun, called the Liberator, five years ago. Wilson said the plastic parts are accessible. He said: "We made a gun that we designed for the most amount of people with the most types of 3D — the most common types of 3D printing. ... So printed pistols, of course, come in printable materials. And right now, for the most part, those are plastics. ABS was the plastic that we use for the Liberator." ABS plastic is affordable and accessible in various retail stores like Walmart.

Ninety-five percent of the Liberator gun is made out of plastic, except for the bullet and one metal screw. The screw is non-functional — it's in there so the gun can be detected by a metal detector in compliance with the Undetectable Firearms Act. 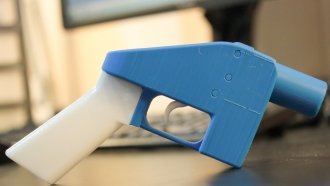 2. It's cheaper to buy a gun than to 3D-print one. In some parts of the country, you can get a gun for as little as $100, while a 3D printer costs a few thousand. Wilson used an expensive commercial printer to create the Liberator, but there are others who have tweaked his design and created a gun using a printer that costs a little over $1,700. It's worth mentioning that 3D printers are accessible to those who can't buy them. They're in schools and libraries and available for rent.

3. The distribution of 3D-printed gun blueprints has been temporarily blocked by a federal judge, but that Liberator gun file has already been downloaded over 100,000 times in two days when it was first uploaded five years ago. This isn't the first time Wilson's website Defcad has been shut down. A few days before the free site was set to launch again this August, 3D-printable blueprints of an AR-15 had been downloaded 1,000 times. Wilson said: "There are a few types of guns that can be made on 3D printers now, although none of them are reliable or have any type of substantial commercial quality that you might expect in a in a real gun."

4. The concern isn't just about plastic guns. You can mill metal parts as well — and it's untraceable. "Ghost guns," or guns created for personal use, don't have to be registered. Wilson's main business is a desktop-size milling machine that creates metal gun parts. Each machine costs about $2,000. He said: "It's another comparable method for making guns for yourself where you might build like, let's say, a 3D-printable pistol within 24 hours from producing the 16 different parts and then assembling together. ... On a milling machine, this might only take you a couple of hours on a couple different components, and then the rest of the stuff is commercial off the shelf." 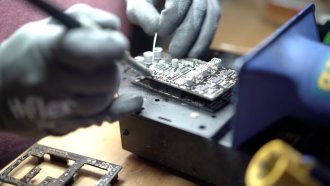 5. Why is Wilson fighting hard to share 3D-printed gun blueprints? He says he believes in free speech and freedom of information. A Seattle federal judge issued a temporary restraining order to block the release of 3D-printed gun blueprints. He said: "There is a possibility of irreparable harm because of the way these guns can be made. ... It would be absurd to say, well, the information related to building guns is in itself inherently dangerous. ... This is an unworkable way of approaching manufacturing or industry or capitalism. ... It's just not reasonable to claim that information in itself is harmful."

For now, 3D-printable blueprint downloads will be unavailable until a court hearing September.