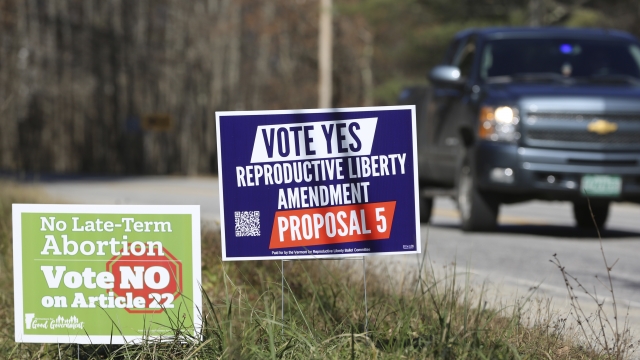 Abortion rights advocates are celebrating sweeping victories across the country in the 2022 midterm elections.

"Today is really a wonderful day for abortion rights supporters," said Elisabeth Smith, director of state and local policy at the Center For Reproductive Rights.

A big part of that victory is ballot initiatives in four states.

"In red states, purple states and blue states alike, voters do not want to see more restrictions on abortion, and they also don't trust politicians to make this decision for them that are taking matters into their own hands at the ballot box," said Kelly Hall, the executive director of The Fairness Project.

"What we know from exit polls, it suggests that a lot of young women who had not and some of whom had never voted before, showed up expressly to vote for reproductive rights," said Michael Cornfield, an associate professor of political management at George Washington University.

The ballot measures came months after the Supreme Court overturned Roe v. Wade and the constitutional right to abortion it guaranteed to women.

Hall, who runs campaigns around ballot measures, says these results show that direct voter initiatives are the most effective way to protect reproductive rights, and indicate they will likely become a new political battlefield as more Republican states seek tighter restrictions on what questions make it onto ballots.

"This will be the proxy war for abortion — ballot measures. This is where conservative lawmakers will try to fight the fight because they know they're out of sync with the electorate on the issue itself," said Hall.

The Supreme Court’s decision overturning Roe v. Wade was not the top issue for voters on Tuesday. But experts say it might have been what pushed some Democrats to the polls in key congressional races.

"That issue, and those votes, definitely blunted what was expected to be a sizable Republican victory, said Cornfield.

When it comes to governor’s races in states where abortion laws are in contention, it’s been a mixed bag. Democrats who campaigned to protect abortion rights won governor’s races in Michigan, Pennsylvania and Wisconsin. While Republicans, seeking more restrictions, won in Texas and Oklahoma.

"That's not to say that, you know, folks in Texas and Oklahoma don't support abortion rights, but they didn't have a ballot initiative and they maybe didn't have candidates who supported their position," said Smith.