5 Planets Will Be Visible From Earth At The Same Time 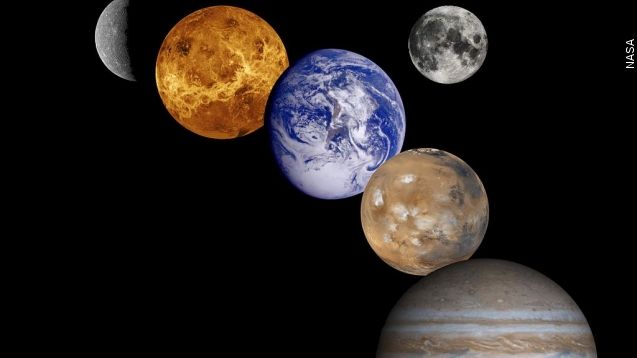 Mercury, Venus, Saturn, Mars and Jupiter are set to make a simultaneous showing that will last about a month.

Get the telescopes ready: Mercury, Venus, Saturn, Mars and Jupiter are all about to be visible at the same time.

On Wednesday, Jan. 20, the five bright planets will be visible from Earth, and the showing will last about a month.

Four of the five have already been visible in the early morning sky, but Mercury will join the group shortly, completing the five visible planet grouping. (Video via NASA)

EarthSky reports people living in the mid-to-northern latitudes can see Mercury best about an hour and half before dawn. In the Southern Hemisphere, it's about two hours before sunrise. Either way, Feb. 7 is expected to be the best day for viewing our solar system's closest planet to the sun. (Video via NASA)

It's the first time the planets have shown up all at the same time in 10 years, but The Conversation reports you won't have to wait another decade to see it happen again. The next five-planet showing will happen in August.