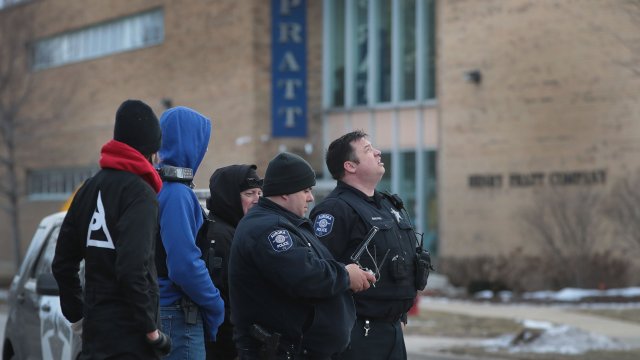 More details have emerged about the shooting at the Henry Pratt Co. manufacturing plant in Aurora, Illinois, on Friday.

In a press conference on Saturday, the Aurora Police Department identified the five victims: Clayton Parks, Trevor Wehner, Russell Beyer, Vicente Juarez and Josh Pinkard. They were all employees at the plant.

The police department says the 45-year-old suspected gunman also worked at the plant. On Friday, police say the suspect was called in for a meeting there, where he was let go. That's when police say he opened fire, shooting and killing three people in that room.

Authorities say the shooter then left the meeting room and killed two other people. Five police officers were also shot and a sixth suffered a minor injury that wasn't related to the gunfire. The police department said all of the injured officers were in recovery.

After arriving on scene, it took about 90 minutes for authorities to find and neutralize the shooter. The suspected gunman was killed in a gunfight with police officers.

Aurora's chief of police said the gunman had six prior arrests — the most recent in 2017 for disorderly conduct and criminal damage to property.

The gun used in the shooting was registered to the shooter. He obtained a Firearms Owner Identification Card in 2014 and bought the gun in question shortly after. The Aurora Police Department said a felony conviction in 1995 should have prevented him from getting a FOID card, though it wouldn't have necessarily shown up on the background check required to get it.

"It's a shame mass shootings, such as this, have become commonplace in our country," Mayor Richard Irvin said. "It's shame that a cold and heartless offender would be so selfish as to think he has the right to take an innocent life."