Earthquakes Like The One In Oklahoma Could Be Humans' Fault 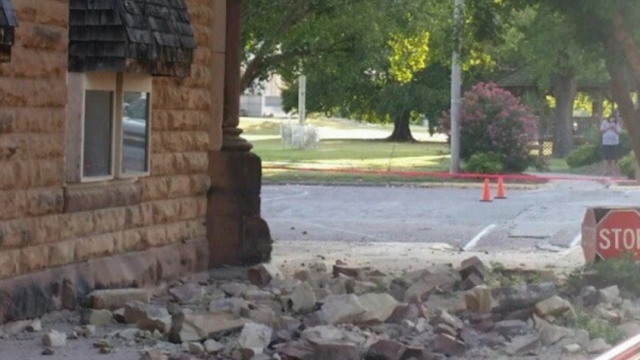 A preliminary 5.6 magnitude earthquake rattled Oklahoma and several other states on Saturday morning.

The center was believed to be northwest of Pawnee, Oklahoma, about 55 miles from Tulsa. People as far north as Fargo, North Dakota, and as far south as San Antonio, Texas, said they felt it.

In March, the U.S. Geological Survey released a map showing its forecast of damage from earthquakes. It was the first time the maps included human-induced earthquakes — from processes like fracking and wastewater disposal — instead of just naturally occurring ones. The three states with the potential highest hazards were Oklahoma, Kansas and Texas — three of the states most widely affected by Saturday's quake.

Immediately after Saturday's quake, people on Twitter were blaming fracking.

The U.S. has seen a significant increase in the number of fracking wells over the past 15 years or so.

Even so, Oklahoma has experienced a lot more earthquakes over the past few years. According to the state, there were 109 magnitude 3 or greater earthquakes in 2013. In 2015, 907 were reported.