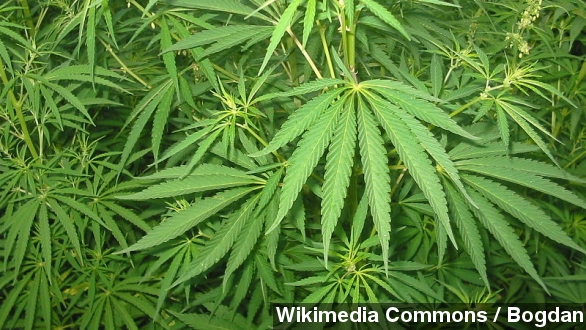 By Lauren Zima
April 24, 2014
Marijuana might be legal in Colorado, but it's certainly not legal for kids. Four 4th graders will be suspended from school.
SHOW TRANSCRIPT

They might've just been budding — get it — entrepreneurs. Two 4th graders in Colorado have been busted for selling weed.

​"The school says the students stole the marijuana from their grandparents. They say the school will be handling their punishment, not the police. One student did try an edible but did not get sick." (Via KWGN)

Hardcore. Well, maybe not that hardcore.

"The young man ate about half of it, so took a small bite."

And they might not be the best at business. It seems the young boy who sold the drugs to three other boys on the playground made just $11 from the sales.

ABC reports the four boys involved will be suspended. This was only a small quantity of pot. But the school's big message here is that adults should hide their marijuana from kids.

Some parents at the school were understandably upset this could happen.

Of course, buying and selling marijuana has been legal in Colorado since January 1st, but that doesn't mean it's legal for kids. (Via The Huffington Post)

And Fox reports there is growing concern over edibles. Their effects don't show up as quickly, so it's easy to eat too much, and they might be easier for children to confuse because they look like normal food. (Via Fox News)

It's unclear exactly how long the students will be suspended.