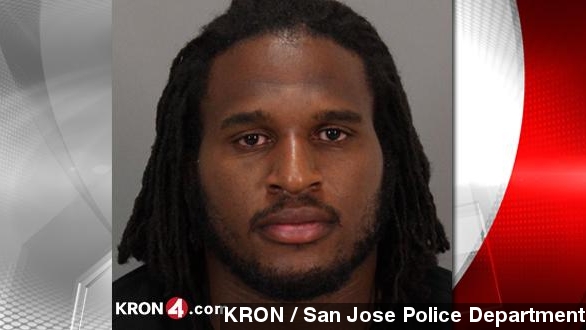 Less than a week after NFL commissioner Roger Goodell set new, strict policies to punish domestic abuse, it appears he'll soon have his first case under the new guidelines.

A Sacramento Bee reporter writes McDonald was arrested for "inflicting injury on a spouse or cohabitant."

And a KNTV reporter says the alleged victim is pregnant, which could result in an even more severe punishment for McDonald. ​

One KTVU reporter quotes McDonald as saying, "truth will come out" calling it a "crazy situation".

Under new NFL guidelines, McDonald is facing at least a six-game ban without pay this year.

In a memo to the NFL's 32 teams, commissioner Goodell wrote players and employees charged with domestic abuse will face a six game ban. Incidents after that result in an indefinite ban with possibility of reinstatement after one year.

And while details about McDonald's incident are currently scarce, it appears he could be facing more than the minimum six games.

Goodell wrote in the memo, "Circumstances that would merit a more severe penalty would be a prior incident before joining the NFL, or violence involving a weapon, choking, repeated striking, or when the act is committed against a pregnant woman or in the presence of a child."

The new guidelines came after Goodell was criticized for giving too lenient of a suspension to Baltimore Ravens RB Ray Rice in a domestic abuse case this year. Rice received a two-game ban, though no charges were filed in that case.

The news is especially troubling for the 49ers who already lost defensive end Aldon Smith to suspension after he violated the league's substance abuse policy.

McDonald was also arrested back in 2010 for a DUI. McDonald reportedly posted $25,000 for bail in this latest situation and was released later Sunday. The 49ers have decided not to comment on the situation yet.