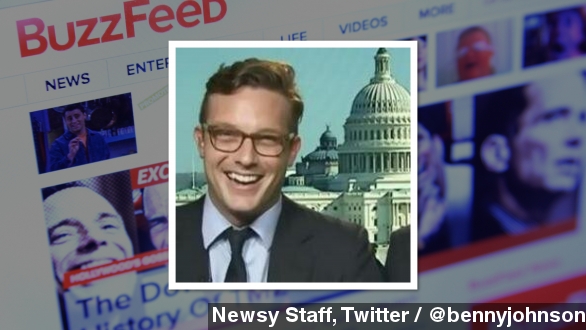 By Mikah Sargent
July 26, 2014
BuzzFeed fired writer Benny Johnson over 41 instances of plagiarism. The move comes after the writer accused others of plagiarizing.
SHOW TRANSCRIPT

No matter your opinion on the site, BuzzFeed appears to be sticking to its policies.

"After carefully reviewing more than 500 of Benny’s posts, we have found 41 instances of sentences or phrases copied word for word from other sites. ... We had no choice other than letting him go." (Via BuzzFeed)

BuzzFeed listed all 41 articles, and says it has corrected the lifted language and included an editor's note. Oddly, the articles haven't been hyperlinked so you'll have to copy and paste the URLs if you want to examine them for yourself.

Of note, New York Magazine reports when Johnson was first accused of plagiarism, BuzzFeed simply updated the articles "with proper attribution." It wasn't until a second round of accusations of plagiarism came about that BuzzFeed decided to review Johnson's works — it was the second round that ultimately led to him being fired.

A writer for Slate seems to offer Johnson the tiniest bit of the benefit of the doubt, writing "he's a photojournalist who fills out his stories with captions, and it's the captions that have got him into trouble. But his photojournalism is all live and earned."

And maybe the benefit of the doubt could have led to a little bit of mercy for Johnson — if it weren't for all this perfect irony we're about to share.

Several news outlets have pointed out how — just two days before Johnson was fired for plagiarism — he was accusing others of it. Johnson apparently felt the Independent Journal Review's story on President George H.W. Bush's socks was a little too similar to BuzzFeed's own story on Bush's socks. (Via Twitter / @bennyjohnson)

For what it's worth, a link to the post returns a 404 error. In other words, Independent Journal Review removed the story from its site.

And the irony doesn't stop there, folks. As Slate points out, BuzzFeed likes to call out others of plagiarism. There's this article about Kentucky Senator Rand Paul plagiarizing published material and this report about other Republicans plagiarizing Rand Paul.

All in all, it looks like BuzzFeed is going to have to take an even closer look at the stories it publishes every day. We're not sure the Internet can take much more irony.