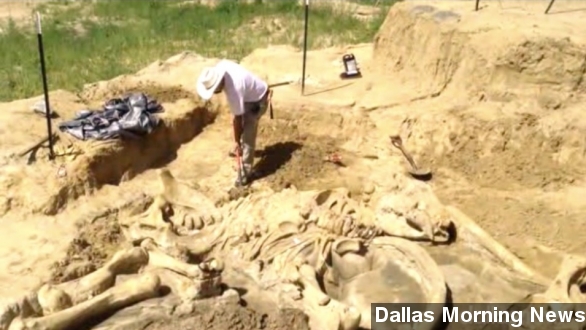 By Katherine Biek
August 26, 2014
A mammoth skeleton was discovered in a gravel pit on Wayne McEwen's Texas farm back in May. It's now being donated to a museum.
SHOW TRANSCRIPT

​An almost completely intact mammoth skeleton is being excavated after it was found buried on a Texas farm in May.

Wayne McEwen told the Dallas Morning News his son and grandson made the discovery while digging in a gravel pit on his property. They first unearthed one of the mammoth’s tusks, and then they just kept finding more and more bones.

WAYNE MCEWEN: "I believe it will be nearly 100 percent because there are two or three legs missing or leg bones. But I believe that when we get the bones that's there up, those other bones will be there."

The Perot Museum of Nature and Science in Dallas was notified of the unearthing and sent specialists out to help with the digging.

And Monday the museum announced on Twitter the skeleton had been donated to the museum by the McEwen family.

The museum already has a mammoth skeleton on display in its T. Boone Pickens Life Then and Now Hall, which also showcases dinosaur skeletons.

KTVT spoke with Tom Vance, a Navarro College professor who says the animal found is a Columbian mammoth. The mammoth's skeleton is estimated to be about 40,000 years old.

​According to the BBC, Columbian mammoths had incredible tusks that could grow to be 4.9 meters long, or a little more than 16 feet. The media outlet says these animals were probably less hairy than wooly mammoths and instead likely had some of their skin exposed.

Columbian mammoths were known to live in the southern half of North America.

Which might explain why Texas has its own museum dedicated to the animal, called the Waco Mammoth Site. It's built on the location where at least 22 Columbian mammoth skeletons were uncovered.

The long process of removing the mammoth bones from the gravel pit on the McEwen farm to a Perot Museum storage facility should begin sometime this week.