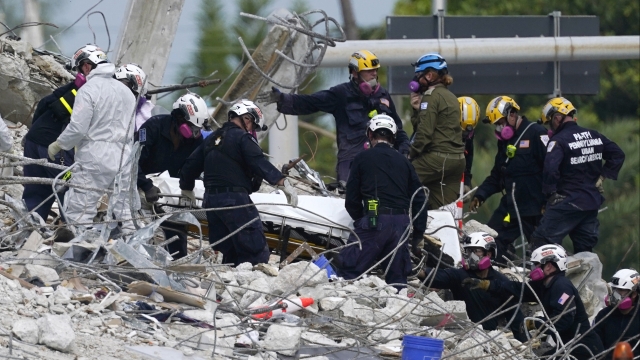 The discovery of four more victims in the rubble of a collapsed condominium building raised the death toll to 32, a fire official said Tuesday as a ramped-up search effort faced new threats from severe weather with Tropical Storm Elsa lashing Florida on a path that would mostly bypass the collapse site.

At the site of the collapsed building Tuesday morning, power saws and backhoes could be heard as workers in yellow helmets and blue jumpsuits sifted through the rubble for a 13th day.

Stiff winds of 20 mph with stronger gusts blew through the area as gray clouds from Elsa’s outer bands swirled above.

Bands of rain were expected in Surfside as Elsa strengthened with potential to become a hurricane again before making landfall somewhere between Tampa Bay and Florida's Big Bend and crossing northern Florida.

The search crews can work through rain, but lightning from unrelated thunderstorms have forced them to pause at times, and a garage area in the rubble has filled with water, officials said.

Still, crews got a big boost when the unstable remaining portion of the Champlain Towers South building came down Sunday.

The demolition, prompted by fears that the structure could fall, allowed rescuers into previously inaccessible places, including bedrooms where people were believed to be sleeping at the time of the disaster, officials said.