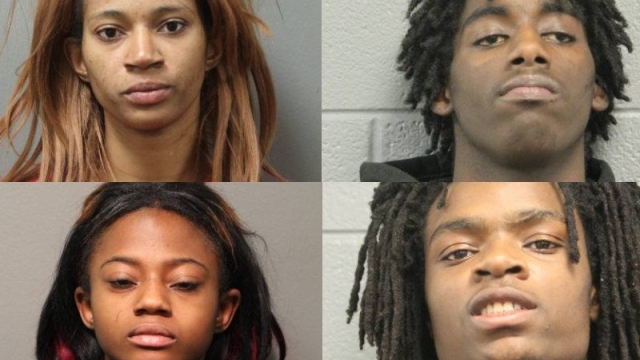 The accused are facing a slew of charges, including kidnapping, battery and hate crimes.

Four people are facing charges after they were accused of beating a man and streaming it live on Facebook.

"You know, it makes you wonder what would make individuals treat somebody like that," Johnson said.

On Wednesday, police arrested two men and two women. The suspects are Jordan Hill, 18 years old; Tesfaye Cooper, 18 years old; and two sisters, Brittany and Tanishia Covington, 18 and 24 years old, respectively. Police say the victim knew Hill from school and had hung out with him occasionally before.

On Saturday, the victim's parents dropped him off at a McDonald's where he was supposed to meet up with Hill. According to police, Hill picked the victim up in a stolen van, and the two continued to drive around and visit friends for a couple days.

On Tuesday, Hill and the victim went to the apartment of the Covington sisters. While there, police say the victim and Hill got into a "play fight," which escalated to violence. The noise from the sisters' apartment prompted a neighbor to call in a noise complaint to police. When the sisters left the apartment to confront that neighbor, the victim was able to escape.

Officers out on patrol Tuesday spotted the victim and described him as clearly distressed. After getting the victim to the hospital, officers found where the beating happened and learned about the disturbing video.

We shadowed CeaseFire Illinois' "violence interrupters" as they try to prevent Chicago gun violence in one of the deadliest years in decades.

The nearly 30-minute recording is laced with profanity, and the suspects can be heard shouting about Donald Trump and white people.

By Thursday, the incident and the use of Facebook Live became national news.

Facebook expanded its live streaming to all users in April 2016. Just a few months later, a Chicago man was live-streaming himself on Facebook when gun shots rang out, and he incidentally streamed his own fatal shooting.

And in July 2016, Philando Castile was shot and killed by a police officer. Castile's girlfriend live-streamed the aftermath on Facebook.

After that shooting, Facebook updated its guidelines surrounding violence and the social network's live streaming. Live videos are held to the same community standards that prohibit violent content, but Facebook notes that context is everything.

In a statement released Thursday, Facebook said "We do not allow people to celebrate or glorify crimes on Facebook and have removed the original video for this reason. In many instances, though, when people share this type of content, they are doing so to condemn violence or raise awareness about it. In that case, the video would be allowed."