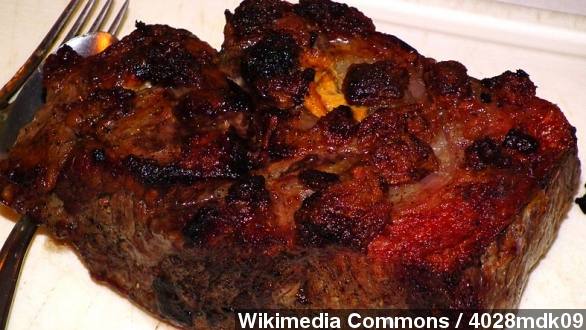 By Jasmine Bailey
June 14, 2014
A Missouri meat company recalled 4,000 pounds of beef due to a clerical error that could cause mad cow disease outbreak.
SHOW TRANSCRIPT

Beef — maybe it shouldn't be what's for dinner.  (Via Wikimedia Commons / David Reber)

Fruitland American Meat in Jackson, Missouri has recalled more than 4,000 pounds of beef over concerns of possible mad cow disease.

"Fruitland American Meat... is defending itself saying the finding is based on a clerical error." (Via NBC)

During a review of the company's slaughter logs, the USDA says it discovered a portion of the dorsal root ganglia, which are branches of the nervous system located in the spine of cattle, was not fully removed. It is considered to be specified risk material that could carry infective agents.

According to the USDA, "The problem may have occurred as a result of the way some company employees were recording information and determining the age of various cattle... Dorsal root ganglia ... must be removed from cattle 30 months of age and older."

This is a class 2 recall, meaning there is a "remote" possibility of harmful heath effects. So far, no cases of mad cow disease from this incident have been reported, and Missouri heath officials are working to make sure all tainted meat is disposed of. (Via KMOV)

"Fruitland of America produced the beef from last September to April and they sent it to Whole Foods Distribution center in Connecticut and two restaurants in New York and Kansas City." (Via HLN)

People can contract the potentially deadly disease by consuming the diseased beef. According to WebMD, the disease can be hard to diagnose in humans. Symptoms include issues with the nervous system like loss of coordination, depression and dementia. It's usually fatal within 13 months.

Fruitland American Meat has reportedly warned its customers and told them to destroy the beef.